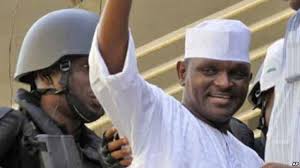 Al-Mustapha made this disclosure in a speech made on his behalf by the President of the Council of Bishops in Nigeria and Niger Delta Bishops and Ministers Forum, His Eminence, Archbishop Julius Ebiwe, who represented him at the 17th anniversary of Lord’s Chosen.

The retired soldier was in detention for years, charged with killing of the acclaimed winner of the epochal June 12, 1993 election, late MKO Abiola’s wife, Kudirat, among other charges.

He was subsequently sentenced to death by an Appeal Court but was later discharged and acquitted.

He equivocally said he was saved miraculously from death throes by the church prayers for him while he was behind bar, saying:   “It’s Chosen that caused the miracle.”