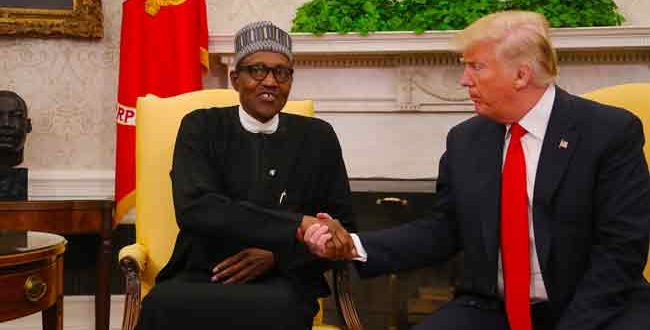 4 weeks ago Comments Off on Trump to Ban Nigeria, Six Other Countries from Entering America 70 Views

Nigeria and six other countries could be included in a fresh immigration travel ban being weighed by the Trump administration.

President Donald Trump Tuesday confirmed the development to the Wall Street Journal but did not name the countries he intends to add to his expanded travel restriction.

Trump spoke in an interview with the newspaper on the sidelines of the World Economic Forum in the Swiss city of Davos. The formal announcement is expected in a few days.

The other countries included are Belarus, Myanmar (also known as Burma), Eritrea, Kyrgyzstan, Sudan and Tanzania, though the list is not yet final and could change, according to a report by Politico, quoting two people familiar with the move.

It will be recall that the original travel ban announced a few days after Trump was sworn in included countries with huge Muslims and created an uproar. The countries are Iran, Libya, Somalia, Syria, and Yemen, along with Venezuela and North Korea.

A draft being considered by the Trump administration, according to Politico would place immigration restrictions on the additional seven countries, but not necessarily completely ban all citizens of those nations from entering the United States. The restrictions could apply only to certain government officials, for instance, or certain types of visas.

Nonetheless, any new restrictions are likely to strain ties with the affected countries, some of which assist the U.S. on issues like fighting terrorism, and some of which Washington has been trying to court for strategic reasons.

Trump signed the original travel ban on Jan. 27, 2017, just a week into his tenure. The order initially denied visas to citizens of seven majority-Muslim countries, though it was later modified as it went through a series of court challenges.

The Supreme Court eventually allowed a third iteration of the order to go into effect. It restricts entry of some citizens from Iran, Libya, Somalia, Syria and Yemen, along with Venezuela and North Korea. Chad was removed from the original list.