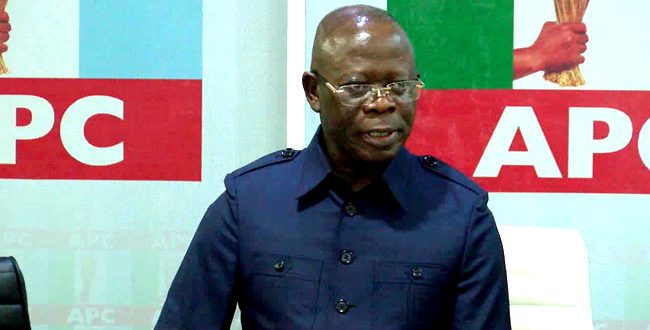 There are strong indications that all arrangements have been tidied to remove the National Chairman of the All Progressives Congress, APC, Comrade Adams Oshiomhole.

Report says the presidency had already acceded to the pressure to remove the former Edo governor in order to arrest the lingering crisis in the ruling party.

It was gathered on good authority that the president gave the blessing for Oshiomhole’s ouster after some stakeholders in the party and some State Governors elected on the APC’s platform convincingly argued against the national chairman’s continued stay in office during a meeting with the president.

Sources said Oshiomhole had already been told that the President wants him to leave the post but he is going round grandstanding, lobbying people close to the president and even using members of his family to beg with the hope that the president would change his mind.

Buhari had until recently stood firmly by Oshiomhole, who has been at loggerheads with key stakeholders and did not heed the president’s admonition to resolve the crisis within the party.

His critics say he is too highhanded, proud and lacks the capacity to manage a political party as diverse as the APC.

National Vice Chairman North East, Comrade Salihu Mustapha, the zone where the office of National Secretary was zoned to, accused Oshiomhole of highhandedness and not following the party’s constitution on the matter.

After storming out of the meeting, Mustapha, told reporters that Oshiomhole was not qualified to preside over the NWC meeting because a court had approved his suspension by the chapter of the party in his home state, Edo State, where he is in a bitter political fight with the Governor Godwin Obaseki and the state executive of the party.