Roberto Firmino was again the hero for Liverpool as the forward’s extra-time goal allowed Jurgen Klopp’s side to beat Flamengo 1-0 in the Club World Cup final in Doha on Saturday and lift the trophy for the first time.

Firmino was picked out by Sadio Mane and waited for goalkeeper Diego Alves to commit before slotting low into the net in the 99th minute of an absorbing contest at the Khalifa International Stadium.

It was the moment that finally punctured the hopes of the Brazilian side and their vibrant support, after Liverpool had been denied a penalty by VAR at the end of normal time.

The Qatari referee initially gave a spot-kick for a foul on Mane by Rafinha on the way into the box, but changed his mind following a lengthy review, forcing the contest into an extra 30 minutes.

Still, the European champions had enough to come out on top, with Firmino repeating his semi-final heroics, when he scored an injury-time goal to secure victory against Monterrey of Mexico.

The win allows Liverpool to complete a fabulous year with a third piece of silverware to go with the Champions League and UEFA Supercup.

Having earned the title of world champions, if Klopp’s team can see out their huge lead at the top of the Premier League this season, they will have a case to be remembered as the finest side in the illustrious history of the club.

Flamengo had been hoping to repeat their win over Liverpool in the old Intercontinental Cup back in 1981 and thereby become the first non-European winners of the Club World Cup since fellow Brazilians Corinthians beat Chelsea in 2012.

They fell short, but they certainly gave the Premier League leaders a game in what was their last outing of a long season.

– Van Dijk back, Firmino hits post –
Klopp had welcomed back Virgil van Dijk after the inspirational Dutchman sat out Wednesday’s semi-final due to illness.

That allowed skipper Jordan Henderson to return to his usual midfield berth, while Firmino, Mane and Trent Alexander-Arnold were all recalled after starting on the bench against the Mexicans.

Firmino, Naby Keita and Alexander-Arnold all came close for Liverpool in the first six minutes as they came flying out of the traps.

Fielding the same team that started their semi-final win over Al Hilal, the Brazilian and South American champions gradually settled into the game, spurred on by their raucous travelling support. 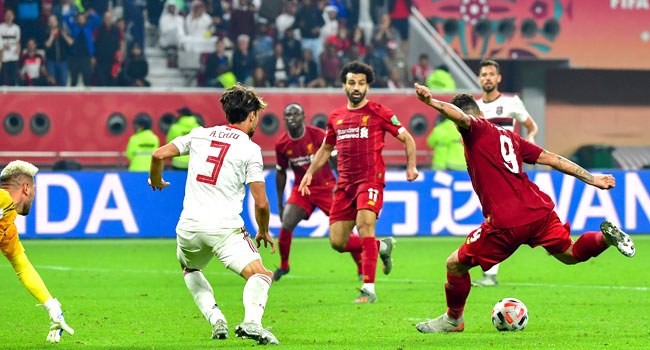 Bruno Henrique, the star of their semi-final victory, had their best opportunity in the first half, coming inside from the left to meet a long ball forward by goalkeeper Alves before seeing his shot deflected past.

The Rio giants, with veteran Portuguese coach Jorge Jesus on the touchline, matched the European champions for much of the first half but were lucky not to fall behind at the beginning of the second period.

Less than two minutes after the restart, Firmino controlled Henderson’s ball forward and sent a shot off the inside of the post before seeing it rebound away.

However, Liverpool also needed goalkeeper Alisson to come to the rescue with a fine stop from a Gabriel Barbosa strike, and Alex Oxlade-Chamberlain then went off injured as extra time began to loom.

Then Alves stretched high to his left to tip a net-bound Henderson shot from 25 yards over the bar before, with the match in injury time, the English side thought they had a penalty for Rafinha’s tackle on Mane.

However, referee Abdulrahman Al Jassim dramatically cancelled the decision after coming across to review the footage on a pitchside monitor.

Liverpool finally found a way through nine minutes into the first half of extra time though, with Mane finding Firmino after being pushed wide of goal by Rafinha.

Firmino made no mistake, and Flamengo were unable to respond.