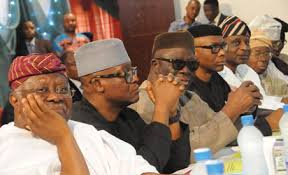 November 27, 2019 Comments Off on Afenifere Warns Against Anarchy in Oyo, Nigeria 57 Views

The Pan-Yoruba Socio-Political Organisation, Afenifere, has warned against any situation that could foist anarchy on Oyo State in respect of the ruling of the Court of Appeal on the Governorship election in Oyo State, just as it condemns any plan by incumbent government to foist a third term agenda on Nigerians.

Afenifere, in a communique made public after its meeting in Akure, Ondo state, condemned what it called “jurisprudential anarchy” daily unfolding in the country.

The communique, signed by Afenifere’s National Publicity Secretary, Yinka Odumakin, indicated that Afenifere at its meeting reviewed the ruling of the Court of Appeal on the Governorship election in Oyo state and resolved to warn against anarchy in a state that has history behind it.

The communique read: “Meeting reviewed the recent ruling of the Appeal Court on Oyo Gubernatorial Polls and was at a loss as to the jurisprudential anarchy daily unfolding in our judicial system.

“That one decision of court confused even the media for the next 48 hours is a challenge to our judiciary to always try and make itself clear to the ordinary people.

“It is our hope that the Supreme Court to which the parties have now headed will resolve the matter in the interest of justice and the integrity of the justice system.

“We do not want any upheaval in the city that has history behind it.”

Afenifere also condemned what it called the third term agenda brewing in Abuja, the nation’s capital, adding that the idea should be perished immediately.

It said: “Meeting took serious note of the rumoured plans to subvert the Constitution of Nigeria to allow  President Buhari to have a third term in office which started with an APC Senatorial Candidate in Bauchi last year during a bye-election declaring that he was coming to the Senate to work for a third term term for Buhari.

This was followed by the President who has a maximum of possible 8 years in office telling the country he was going to lift 100million Nigerians out of poverty in TEN years.

To douse the tension the rumoured plot is generating, the President made a denial a few days ago which we took with a pinch of salt because it is not the first time politicians would pursue what they are denying in Nigeria swearing with Allah/God.

We have not forgotten that General Buhari told this country in 2011 that he would do only one term if he became President. He is now on a second term.

He also promised Nigerians in 2015 that he would not have the office of the first Lady as President. He was mute when the wife issued an order that she must be addressed as First Lady and he has gone ahead to appoint 6 aides for the office.

Meeting also observed that the reason given for the President for not thinking of a third term is the Constitutional limit of two terms without talking about what he would do if that hindrance was removed.

With the National Assembly in the pocket, the only hurdle left to change that provision would be two-thirds of Houses of Assembly and we have seen the President holding meeting of 36 Speakers.
And shortly after this meeting, an APC member in Eboyi State has approached a Federal High Court to compel the National Assembly to remove the constitutional impediments against third term for President and Governors.

“We have seen this fire before for this smoke not to be strange to us. Afenifere therefore calls on Nigerians to be vigilant and thwart any attempt to take the country for a ride once again.”