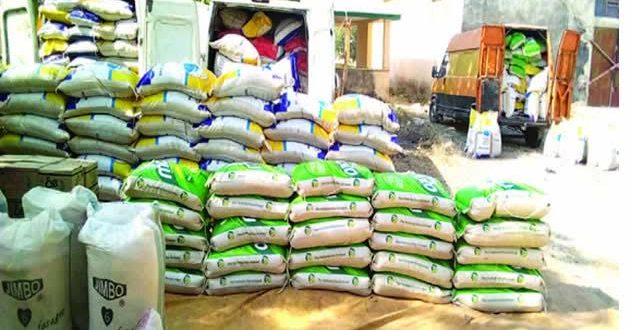 Customs Seizes 34 Containers Of Expired Rice At Tin Can Port

October 29, 2019 Comments Off on Customs Seizes 34 Containers Of Expired Rice At Tin Can Port 62 Views

The Nigeria Customs Service (NCS) says it intercepted 34 containers of expired rice smuggled through the Tin Can Island Port, Lagos.

Hameed Ali, comptroller-general of customs, who announced the development on Tuesday, said some of the bags of rice are expired while some are close to the expiry date.

The seizure was made four days after the service intercepted 25 containers of expired edible products at the same port and a day after five containers laden with rotten fish was found in the Apapa area of the state.

The expired rice is said to have been imported from China and Thailand.

The customs chief put the duty value of the seized goods at N2.7 billion.

He said the closure of Nigeria’s land borders to trading activities prompted the diversion of smuggled goods to the seaports, adding that the service has boosted surveillance around the ports.

“Specifically we are aware that the partial closure of the land borders has resulted in the diversion of some cargoes back to our seaports,” Ali said.

“While we welcome this development which no doubt will boost revenue, improve our trade facts and figures and sustain our diversification efforts, we have also recorded a number of seizures of unwholesome products which otherwise would have been smuggled through the borders.

“Realising that there may be a possible backlash to the closure of the land borders, I directed all seaports and airports to beef up surveillance and intercept any illicit and prohibited consignment for which attempt for their smuggling may be made through these entry points.

“This decision was made considering that those consignments may have been paid for and the importers will devise entry means to ensure they are delivered to their warehouses in Nigeria.”

Share
Previous Buhari Sends List Of NDDC Board To Senate For Confirmation
Next You Cannot Escape Justice At Supreme Court, PDP Tells APC