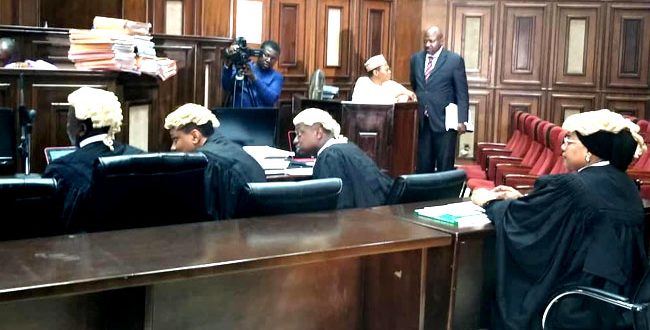 The Federal High Court in Abuja has ordered the closure of operations of Process and Industrial Development Limited (P&ID) and P&ID Nigeria Limited (P&ID).

Justice Inyang Ekwo gave the order following the arraignment of the companies on Thursday by the Economic Financial Crimes Commission (EFCC).

He also held that P&ID Nigeria Limited, which is the second defendant, forfeits its assets to the Federal Government of Nigeria.

“An order is hereby made for the second convict to be wound up and its assets forfeited to the Federal Government,” Justice Ekwo said.

The judge gave the ruling after the representatives of the companies pleaded guilty to the 11 charges brought against them by the anti-graft agency.

Earlier, the prosecutor informed the court that it had brought 11 charges against the defendants.

The defendants, on their part, did not object to the charges to be read to them.

While reading the counts, the representatives of the companies pleaded guilty all the charges brought against them by the anti-graft agencies.

They pleaded guilty to count seven, and count eight of concealing the origin of over N3 million operated by P&ID when they knew that the money formed part of proceeded of an unlawful act.

The companies pleaded guilty to count nine that between January and December 2009, they concealed the unlawful origin of over N2 million in a commercial bank when they reasonably ought to know that the proceeds formed part of their unlawful act of tax evasion.

They pleaded guilty to concealing the origin of over N1 million in a commercial bank operated by P&ID when they ought to reasonably know that it formed part of proceeds of tax evasion by the company.

The defendants also pleaded guilty to the last ‘count 11’ for failing to comply with the requirements of submitting a declaration of their activities to the Ministry of Trade and Investment.

After pleading guilty to the charges, the prosecution asked the court to take a review of the exhibits before it.

Justice Ekwo, thereafter, permitted the prosecution to go ahead to call its witnesses while Umar Babangida appeared first to give his testimony.

Babangida identified himself as a Chief Superintendent of Police and an investigator with the EFCC for the past 10 years.

He referred to the other witnesses who he said he met while investigating the abuse of office, economic sabotage, and money laundering after a petition was sent to the anti-graft agency.

The witness narrated that said the deal took place under two persons who are now late – Dr Rilwanu Luckman and Micheal Quinn – on behalf of P&ID and witnessed by Mr Kuchazi on behalf of the company.

He said there was an agreement for P&ID to build a processing plant in Cross River State after the company stated in the Memorandum of Understanding with the government that they had a piece of land in Cross River.

Babangida, however, stated that investigations indicated that there was intent by the company to acquire the land but it never fell through.

He added that an investigation with the Corporate Affairs Commission (CAC) indicated that the first defendant was a director of the company with nine million shares.

The investigator said the EFCC discovered that the company paid tax and Vat of N3 million naira, instead of a little above N13 million naira VAT that should have been paid.

According to him, he also extended investigation to claims that the Special Declaration Unit of the company registered with the office but it was discovered that they were never registered.

Babangida told the court that a complementary card belonging to Mr Kuchazzi showed that he was the commercial director of P&ID British Virgin Islands.

The statements of the witness were admitted as evidence while the judge said the testimony was to review the facts of the case.

Court Admits Evidence
The witness also identified documents recovered during investigations but they were not admitted immediately as evidence as the judge rose to allow the prosecution to paginate them.

They include an agreement between the companies and the Ministry of Petroleum Resources dated 11/01/2009; MoU between the company and ministry dated July 2009, and a minute of attendance of ministerial meeting of accelerated gas development, among others.

The documents were admitted with no objection by the defence counsel.

Meanwhile, the representative of the second defendant, Usman is representing himself and did not also object to the admissibility of the documents.

He informed the court that he is a lawyer called to the Nigerian bar.

The prosecutor then asked the witness of the company if they had any land in Calabar and the witness said from his findings, they had no land there.

According to the witness, investigation showed that the company defaulted in the payment of tax and remittances and they also had no license to deal in petroleum resources in Nigeria.

He added that the second defendant did not comply and make a report to the Special Control Unit on money laundering.

Court Gives Verdict
In his ruling, Justice Ekwo noted the plea of guilty by the defendants and convicted them of the charges against them.

“I have reviewed the evidence tendered in this court. I have taken note of the plea of guilty and it is upon this premise that I find the first and second defendant guilty as charged.

Addressing the court before sentencing, counsel to the first defendant urged the presiding judge to take the cooperation of his client into consideration.

The representative of the second defendant also made a similar plea by showing a desire not to delay or waste the time of the court.

In its response, the prosecution commended them for their conduct but insisted that the law was the law and it must take its course.

It added that under Section 19 of the Money Laundering Act, where a corporate body is convicted irrespective of whether it is a local or foreign company, it should be folded and its assets forfeited to the Federal Government.

Justice Ekwo, on his part, asked why the prosecution did not charge the defendants under Section 54 of the Company and Allied Matters Act.

It responded that it was satisfied that the offshore company committed the offences of money laundering and advance fee fraud.

Delivering his judgement, Justice Ekwo said, “I have listened to the parties in this case. Being that the entities involved are corporate entities, the punishments to be meted to them are enshrined in the law.”

He consequently ordered that the companies be wound up and their assets be “forfeited to the Federal Government of Nigeria”.