He defeated veteran Senator Ike Ikweremadu, who represents Enugu West, and who is beginning his 5thterm in the senate by scoring 68 votes to Ekweremadu’s 37.

105 senators-elect voted. One abstained. One vote was invalid.

Voting in the election of Deputy President of the Senate started at 12.30p.m. and was concluded 1.30 p.m. and counting started almost immediately.

By the time counting was concluded at 1.48 p.m., the winner was beyond any reasonable doubt. It was a land slide victory for Omo-Agege who many Nigerians would remember for leading some hoodlums to the senate to snatch the Mace during the just concluded 8th session of the National Assembly. 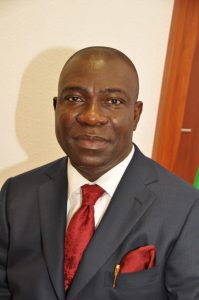 Born on August 3, 1963, the new Senate President attended St. George Grammar school, Obinomba Obiaruku, Delta State, after which he proceeded to the University of Benin where he graduated in Law in 1985 and was called to the Nigerian Bar the following year. He obtained his Master’s degree in Law from the University of Tulane University Law School in 2002.

After completing his mandatory one year national service with the Directorate of Criminal Investigation and Intelligence, Kwara State Command of the Nigerian Police Force, Omo-Agege began his Law practice in 1987 with PAT OKUPA & Co in Lagos.

In 1989, Omo-Agege  co-founded a law firm, Agege & Co. Omo-Agege, and later moved to the United States in 1990, where he worked as a foreign associate at Charles O Agege’s Law Office in Los Angeles, California.

Omo-Agege started out in politics by contesting for the ticket to be a representative at the Delta State House of Representatives under the platform of the Peoples Democratic Party, a ticket he lost in the party primaries. In 2003, former governor of Delta State, James Ibori, appointed Omo-Agege as an executive assistant, a position he held for two years. He was later appointed as a commissioner for special duties by the governor.

Omo-Agege ran for the office of the Governor of Delta State but lost out at the People Democratic Party’s primaries to Governor Emmanuel Uduaghan..

Omo-Agege was appointed as the Secretary to State government (SSG) of Delta State by Governor James Ibori in 2007.

Omo-Agege ran for senate in 2015 under the platform of the Labour Party. He was elected as senator representing Delta central senatorial district on March 28, 2015.

Omo-Agege defected from the Labour Party to the All Progressive Congress (APC) on March 7, 2017.[7] Ovie Omo-Agege is the Senator elect representing Delta Central in 2019 general election.

The 9th Senate will be Ekweremadu’s last sojourn in the upper chamber; that is, if he sticks to the promise he made in May this year that he will retire from the Senate in 2023.

He pledged never to seek election to the Red Chambers again.

Ekweremadu, who represents Enugu West in the National Assembly, made the announcement during his 57th birthday celebration on May 12, 2019 in Enugu, the Enugu State capital.