Amosun Accused of Blocking Road to Venue of Inauguration, It’s a Lie – Amosun

May 23, 2019 Comments Off on Amosun Accused of Blocking Road to Venue of Inauguration, It’s a Lie – Amosun 98 Views

For most of his eight years at the saddle as Ogun State Governor, Ssenator Ibikunle Amosun endeared himself to both citizens and non-citizens alike with his superlative performance in the provision of infrastructure and rehabilitation of dilapidated ones.

But at the twilight of his reign, Amosun is alleged to be portraying himself as a text-book definition of a bad loser. 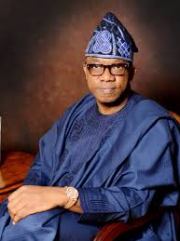 Prince Dapo AbiodunHe won the ignoble title with his latest display of disdain for his soon-to-be-enthroned successor, Prince Abiodun Adedapo.

Said to be hiding under the guise of continuing work on his road projects, the outgoing Governor  has shut the road leading to MKO Abiola Stadium, Abeokuta, the state capital, where Prince Dapo Abiodun, his successor, will be inaugurated.

Not only that, Amosun also ordered  his contractors to dig a deep gully in front of the June 12 Cultural Centre, where Abiodun’s inauguration lecture is holding today, May 23, 2019.

As if that was not enough, a huge heap of sand has been dumped at the entrance, and parked a bulldozer on ostensibly to make access almost impossible.

Amosun’s strange behaviour has gone viral on social media with commentators heaping vitriolic comments at him.

The excavator blocking the road to the inauguration venueTunde Oladunjoye, a citizen and social commentator took to the whatsapp page of the Ogun Daily Core, and asked:  . He added: “The question is: Would this have happened is it is Amosun’s puppet that is to be inaugurated as Governor?”

Yinka Olayemi, a member of the group, quipped: “Yes. I told someone yesterday that those attending today’s event will have no choice than to drive through NNPC via Stadium to Cultural Centre.”

“It is over. The outgoing governor can never and never run foul of the Constitution of the country by extending his day in office.” 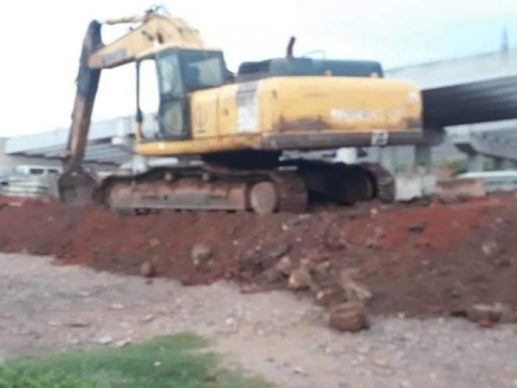 Another view of the excavator

Femi Oteweso, yet another member of the group added his voice: “We saw it today too, but we all expressed the opinion that people can take the M.K.O Stadium to access the June 12 Cultural Centre for the event.”

Meanwhile, the governor in a statement signed by his Special Adviser on Information and Strategy, Rotimi Durojaye, has debunked the claim

According to a release captioned “Be Wary of Mischief Makers,” Durojaye dispelled the claims saying the government’s effort on the roads was to pave the way for a seamless transition by easing the movement of visitors expected to grace the occassion, especially, President Mohammadu Buhari.

Be Wary of Mischief Makers………………..Ogun Govt
The attention of the Ogun State Government has been drawn to several unfounded allegations and innuendos trending in the public space with regard to the upcoming inauguration of the new Administration. Two of such unsavoury allegations are worthy of mention here. The first was that Government deliberately blocked the road and approach leading to the June 12 Cultural Centre venue of pre-Inauguration activities. The second, rather more reckless, was the story credited the Police Public Relations Officer, Ogun State Command, that the Police had uncovered a phantom ploy to disrupt the upcoming inauguration activities. We will hope that the PPRO was misquoted.
Suffice to say that our Administration has earned a reputation for not engaging in needless media war, particularly puerile allegations and innuendoes from political jobbers and mischief makers with purpose to serve. Our disposition therefore remained to maintain stoic and dignified silence, even in the face of criminal untruths and unfair provocation as we are confident that posterity and chroniclers of history will properly situate our respective roles.
Having said that, we say emphatically that the allegations alluded to above are figments of the imagination of the mischief makers. The on-going construction works between NNPC and Kuto Roundabout started over a year ago. Ironically, what the Contractors are doing in the past few days is to tidy up that axis to ensure more comfortable motoring experience for members of the public who will receive President Muhammadu Buhari on Saturday, and by implication to make attendance at the inauguration programme more convenient. That lofty objective was achieved and today the pre-inauguration programme of the incoming Administration is the earliest beneficiary of that thoughtful intervention. As for the phantom disruption tale, we have engaged the Police authorities to stress the real danger in dishing out manifestly untrue, unproven and de-marketing statements to the public. We have received assurances that no one will become a tool in the hands of the Fifth Columnists who do not wish Ogun State well.
We assure all stakeholders that we shall do all within our power and resources to keep the hard earned peace in this blessed State. As the sitting Administration, we intend to sustain the appropriate environment for the new Administration to take off orderly.
Thank you.
Rotimi Durojaiye
Special Adviser on Information & Strategy
Thursday, 23 May, 2019
Post Views: 0