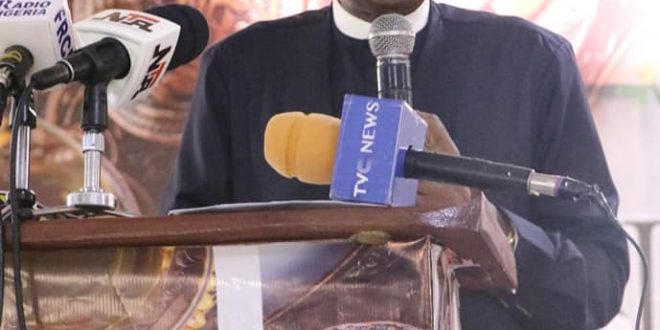 May 18, 2019 Comments Off on FG Has Credible Evidence Of Plans To Subvert Government- Lai Mohammed 44 Views

The Minister of Information and Culture, Alhaji Lai Mohammed, has said the Federal Government has credible evidence on the unrelenting efforts of the political opposition and their cohorts to subvert the government and cause mayhem in the country.

The Minister, who made the remarks at the 12th Annual Lai Mohammed Ramadan Lecture in Oro, Kwara State, on Saturday, said the alarm the government raised a few days ago, that the PDP and its presidential candidate are doing everything possible to sabotage the Buhari Administration, is credible.

“As you are aware, a few days ago we raised the alarm that either by themselves or via their proxies, the PDP and its presidential candidate are doing everything possible to sabotage the Buhari Administration, generally overheat the polity and make Nigeria seemingly ungovernable. Of course you are aware of similar alarms that have been raised by the police, the military and the DSS.

“Our interventions are based on credible evidence, and no government with the kind of evidence that we have, of plans to subvert the power of the state, attack the nation’s economic live wire and generally unleash mayhem on the polity, will keep quiet. The security agencies are all alert to their responsibilities and will not sit by and allow anyone to reverse the gains of our democracy under any guise,” he said.

Alhaji Mohammed said since the government and the security agencies raised the alarm, pseudo and partisan analysts have teamed up with the spokesmen for the main opposition party and its presidential candidate to either exhibit their ignorance or to engage in red herring and name calling.

But he assured that the government will neither be distracted nor be dissuaded.

The Minister said as Muslim faithful observe the holy month of Ramadan with fasting, prayers, self-purification, renewed focus on religion and sense of community, it is appropriate to call on all Nigerians to pray for ”our dear country, to pray for peace and unity”, especially as the May 29th inauguration of the President approaches.

In his remarks, the Executive Governor of Kebbi State, Senator Abubakar Atiku Bagudu, who was the Special Guest of Honour at the occasion, spoke on the challenges of food security in the country and urged government at all levels and the communities to support and
promote peaceful co-existence among all those involved in food production in the country.

“The food system itself is threatened across the length and breadth of the country because the participants in the food chain – the farmers; the fishermen; those in the livestock sector – all are challenged that they cannot find enough resources be it land, fresh water or grass in order to undertake and continue to support food production in the way they hitherto.

“So that brings a sense of urgency for us in the leadership, either at the local government level or state government or the federal government and community leaders to quickly address our minds on how we can support all the groups to cooperate with each other and focus their mind so that production can be increased,” he said.