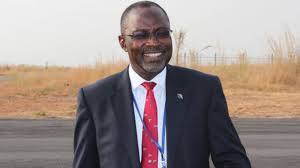 May 16, 2019 Comments Off on AIS Automation Stalls As Customs Refuses Clearance of Equipment 25 Views

To realise a speedy completion of the Automation of the Aeronautical information Service, AIS project in Nigeria may have suffered a major setback as the Management of the Nigeria Airspace Management Agency NAMA, is unable to clear the equipment meant for the project from the seaport.

The N1billion equipment purchased was brought into the country last year and is yet to be cleared after conceited efforts made by the agency’s management.

At the celebration of the 2019 World AIS Day in Lagos, Managing Director NAMA, Captain Fola Akinkuotu said the Nigeria Customs service, NCS, was asking for N100 million before the clearance of the equipment and had refused to grant waiver for the release of the equipment.

Captain Akinkuotu represented by the Director Operations, Mr. Lawrence Pwajok at the event with the Theme: “The Benefits of Automation to Aeronautical Information Management”, expressed fear that the equipment may rust and become obsolete if not cleared now.

“Clearing of these good and paying customs duties cost hundreds of millions because these are very expensive equipment, we must find funds for doing this clearance and it must be done urgently because the equipment cannot remain in the ports at the risk of bad weather and anything could expire there and we will run the risk of starting all over again”.

He explained that the agency was asked not to include the clearance fees for the equipment in last year’s budget and assured that as a government agency the equipment would be granted waiver.

According to the MD, the waiver was turned down by the Customs last month when the agency went for clearance.

Akinkuotu assured AIMAN that management was working hard to ensure more AIS officers were trained ahead of the completion of the Automation system, adding that efforts were on in providing conducive working environment for the officers to carry out their job effectively toward ensuring safety.

In his speech the Acting General Manager AIS Mallam Kabir Yahaya Gusau, said the milestone that AIS was able to achieve would be a mirage without the favorable disposition of the NAMA boss and management team towards AIS personnel.

He urged the engagement of more personnel and their retraining nationwide, adding that the completion of AIS automation should be carried out as required by the International Civil Aviation Authority.

Gusau therefore called for serious intervention by the Federal government and the management of NAMA in ensuring the establishment of quality management system for AIS /AIM being ICAO basic requirement.

According to Gusau, this would enable the AIS /AIM comply with ISO 9000 an applicable requirements control of processes and to minimize risk and ultimately satisfy AIS /AIM products.

He explained that Nigeria was far behind other countries in the AIS automation stressing that others were already implementing AIM in their countries.
He however thanked the government for supporting NAMA in ensuring airspace safety.