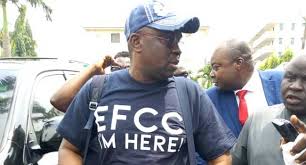 Share
The Federal High Court in Lagos Monday heard how the N1.2billion allegedly given to former Ekiti State Governor Ayo Fayose from the Office of National Security Adviser (ONSA) was moved to the state.
The Economic and Financial Crimes Commission (EFCC) is trying Fayose for allegedly receiving and keeping N1.2billion and $5million allegedly stolen from the ONSA.
Testifying before Justice Mojisola Olatoregun, the 11th prosecution witness, Mr. Sunday Alade, said he was the Zenith Bank Plc Akure Branch Manager in 2014 when the money was moved to his branch.
Led in evidence by prosecuting counsel Mr Rotimi Jacobs (SAN), the witness said he got a call from his head of operations asking him to prepare to head for Akure Airport to receive cash from a customer.
“On the 17th of June 2014, I was in my office in Zenith Bank, Akure. I received a call from my head of operations Abiodun Oshodi that a customer would be coming to make deposit into his account with the bank.
“He said in order to provide security, we should arrange for a van bullion to go to the airport to pick the cash.
“After an hour, my head of operations Abiodun Oshodi came and said the customer had arrived. He introduced Abiodun Agbele as the customer.
“He said we should prepare to go to the airport. I asked for time to arrange for security, but they said that won’t be necessary as they had sufficient security.  They came with MOPOL and some soldiers in a Hilux van,” Alade said.
The witness said he joined Oshodi and Agbele to the airport, along with the bullion van and the security men.
Alade said: “At the airport, we waited for a few minutes before the arrival of the aircraft. Three individuals came out of the aircraft.
Read Also: Obanikoro ends evidence against Fayose
“Two of them walked away. The remaining person introduced himself as O. Adewale. The cash was offloaded into the bullion van and we drove to Zenith Bank Akure,” Alade said.
He said when they arrived at the bank; the money was counted in his presence.
He said Oshodi, Adewale and Agbele were also present.
“The money was counted in our presence. It was N724million. We were informed that there was a balance. We went back to the airport and picked N494million.
“The total cash amounted to N1.219billion. Another aircraft brought the N494million.
“I gathered that the cash was lodged in three bank accounts – those of De-Privateer, Spotless Investment and Ayodele Fayose.
“I also understand some cash was taken away that day by Mr Agbele.”
Asked who Adewale was, he said: “Adewale O. introduced himself as Obanikoro’s ADC (aide-de-camp).”
Asked if he knew those who walked away from the aircraft after it landed, the witness said: “One of them resembled Obanikoro. I never met him in person. But he resembled the person I saw on television and newspapers.”
Under cross examination by defence counsel Ola Olanipekun (SAN) and Olalekan Ojo (SAN) (for Spoless Ltd, Fayose’s co-accused), the witness said he did not know where the money came from.
Asked if he knew what the money was meant for, he said: “Not at all.”
The witness said it took 10 days to process the cash.
In response to a question by Ojo as to whether he submitted a bulk cash register to EFCC on the transaction, the witness said “No.”
Ojo showed the witness a statement of account belonging to Spotless Investment.
He was asked to identify entries for October 6, 2014, September 5, 2014 and December 6, 2014.
Alade said the entries showed the transfer of N11.173million each described as “mortgage repayment” and “mortgage loan liquidation”.
He added: “But I didn’t know anything about the transactions.” Ojo said: “Don’t worry.”
Before the trial began, Jacobs said he was involved in an accident and had to come to court in crutches.
He asked the court to allow him take only one witness, but he did not disclose when or where he had the accident.
He was seen wearing a heavy bandage brace on his right foot with no footwear on.
There was also no indication that the case would be transferred to another judge.
EFCC Acting Chairman Ibrahim Magu reportedly wrote to the Chief Judge, asking that the case be withdrawn from Justice Olatoregun and re-assigned to another judge.
Magu was said to have expressed lack of confidence in the judge.
But no reference was made to the purported letter to the CJ by Magu.
Fayose had pleaded not guilty when he was arraigned on an 11-count charge on October 22 last year.
EFCC said he and Agbele, facing a different charge, allegedly took possession of N1, 219,000, 000 on June 17, 2014 to fund the former governor’s 2014 gubernatorial campaign.
The commission said Fayose “reasonably ought to have known” that the money “formed part of the proceeds of an unlawful act, to wit: criminal breach of trust/stealing.”
EFCC said Fayose, on the same day, received cash payment of $5million from former Minister of State for State for Defence Musiliu Obanikoro, without going through a financial institution.
The commission said the sum exceeded the amount authorised by law, thereby violating the Money Laundering Act.
Justice Olatoregun adjourned until May 10 and 14 for continuation
Post Views: 0

Share
Previous A Professor’s Cure for Dangote’s Headache By Tunde Odesola
Next Death in NSCDC custody: Human Rights Lawyer in Ondo Steps In