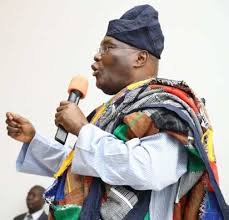 Presidential candidate of the Peoples Democratic Party (PDP) and former Vice President of Nigeria, Atiku Abubakar says the election of Rt. Hon. Ahmadu Fintiri as governor of Adamawa State is a dawn of a glorious new era for the state.

The former Vice President remarks that he is particularly delighted that the PDP came victorious in the governorship election in his home state, and that the decision of the vast majority of Nigerians to vote for the PDP signifies that the party is truly a party of the people.

“My home state of Adamawa has chosen the Peoples Democratic Party to lead them. I am truly proud of this and let me assure you that you have chosen a leader with the zeal and determination to put Adamawa on the best path.

“You have chosen a leader who appreciates Adamawa’s diversity and who will run an inclusive government for the betterment of all,” Atiku says.

Atiku therefore congratulates Governor-Elect Ahmadu Fintiri for his resounding success at the polls in spite of the various antics of the ruling party to frustrate the wishes of the people in the state.

“Our people have stood with Governor-Elect Fintiri in the course of this election with an abiding commitment never to allow the power that be to rob them of their votes. I congratulate you on your election, while I also hail our people for making the right decision to choose you  as leader at this point in time. I am confident that the hope reposed in you is well placed and that your tenure will launch our state to greater heights”.