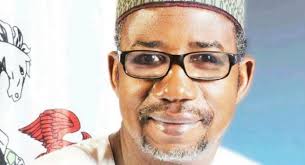 The INEC Returning Officer for the state, Professor Kyari Muhammed, who made the declaration moments ago, said  the former Minister scored 515,113 votes to beat the incumbent governor, and candidate of the All Progressives Congress, APC, Muhammed Abubakar, who polled 500,625 votes.