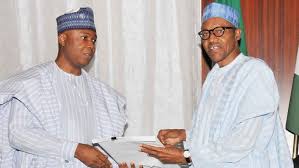 President Muhamamdu Buhari On Monday Received The Report Of The Technical Advisory Committee On The Implementation Of The New National Minimum Wage At The Presidential Villa, Abuja.

President Buhari had on January 9 inaugurated the advisory committee chaired by an economist and financial expert, Bismarck Rewane, where he reiterated his commitment to an upward review of the minimum wage.

The president had on December 19, 2018 while presenting the 2019 Appropriation Bill at the joint session of the National Assembly announced his intention to constitute the committee.

He said the committee would recommend “modalities for the implementation of the new minimum wage in such a manner as to minimise its inflationary impact as well as ensure that its introduction does not lead to job losses’’.

NAN reports already the two chambers of the National Assembly had deliberated and approved the bill on N30,000 as new national minimum wage.