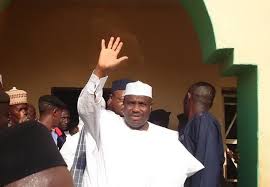 The incumbent governor of Sokoto, and candidate of the Peoples Democratic Party, PDP, Aminu Tambuwal, has won the governorship election in the state.

Tambuwal, a former Speaker of the House of Representatives, won re-election with 512,002 votes above his closet rival and candidate of the All Progressives Congress, APC, Ahmadu Aliyu, who scored 511,660.

Tamuwal won the contest by the skin of his teeth with a margin of 342 votes.

Prior to the final declaration, the Resident Electoral Officer, Prof. Sadiq Musa, had said the declaration of winner will be based on a simple majority.