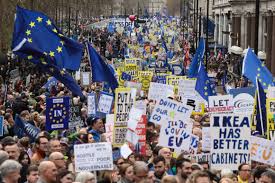 London Locked Down as One Million People March Against Brexit

March 24, 2019 Comments Off on London Locked Down as One Million People March Against Brexit 39 Views

In one of the biggest demonstrations in British history, a crowd estimated at over one million people yesterday marched peacefully through central Londonto demand that MPs grant them a fresh referendum on Brexit.

The Put it to the People march, which included protesters from all corners of the United Kingdom and many EU nationals living here, took place amid extraordinary political turmoil and growing calls on prime minister Theresa May to resign.

Although organisers said precise numbers had been difficult to gauge, they believed the protest could have been even bigger than that against the Iraq war in February 2003.

The decision by so many to take part, waving EU flags and banners and carrying effigies of Theresa May, came just three days after the prime minister said in a televised statement to the nation that she believed the British people did not support another referendum, and blamed MPs for trying to block their will.

Addressing the crowd in Parliament Square – as chants of “Where’s Jeremy Corbyn?” rang out – Watson said May could not ignore the demonstration and had to give the people a second vote. “The prime minister claims she speaks for Britain. Well, have a look out of the window, prime minister,” he said.

“Open your curtains. Switch on your TV. Look at this great crowd today. Here are the people. Theresa May: you don’t speak for us.”

Labour’s attempts to find common ground on Brexithad been rebuffed, he said. “At every turn, we have been ignored. At every stage, Theresa May has doubled down rather than reaching out. The way to break the stalemate is for parliament and the people to come together. The way to reunite our country is to decide on our future together. It’s time to say with one voice: put it to the people. Prime minister, you have lost control. Let the people take back control.”

As Conservative MPs and ministers from both sides of the Brexit argument said May could not last in office for many more days – and Downing Street appeared to threaten them with a general election if her deal does not pass this week – Heseltine laid blame for the current crisis at her door.

“Generals who lose wars blame the troops. Managers who break their companies blame the workers. Now we can add prime ministers who lose elections blame their MPs. I may be naive. But if something is wrong, I look first for the person in charge.”

Heseltine closed the rally with an appeal to young people to defend their democracy and Britain’s place in the world. “Walk tall. Keep the faith. Go back to your villages, your towns and your cities,” he said. “Tell them you were here. Here, in Parliament Square. Outside the buildings that inspire parliamentary democracy. Fighting for our tomorrow.”

Sturgeon said that the EU’s decision last Thursday to delay Brexit day from 29 March until 12 April at the earliest had created more time to prevent disaster. “This is now the moment of maximum opportunity – we need to avoid both the catastrophe of no-deal and the damage which would be caused by the prime minister’s bad deal.”

Organisers said that mobile phone networks jammed and many people barely moved all afternoon as the crowd exceeded expectations. Yesterday a petition calling for article 50 to be revoked passed 4.5 million signatories, making it the most popular the government petitions website has ever hosted. Once any petition of this sort passes 100,000, parliament has to consider debating it.

The march happened ahead of another critical week for Brexit and the prime minister. Last night, as a growing number of Tory MPs said they would back a no-deal Brexit rather than May’s deal or some other arrangement – and many predicted the prime minister could be gone by the end of the week – Downing Street hit back, saying that if they pushed for a no-deal departure, the result could be a general election. “No-deal is not going to happen. Parliament will not allow it,” said a senior No 10 source. “There are so many people opposed to this in parliament that there would be a confidence motion in the government before no-deal. That could mean a general election.”

On Monday a powerful group of backbench MPs will attempt to hand control of the Brexit process to parliament by securing indicative votes on alternative options for Brexit, including a soft, Norway-style option.

Downing Street had been expected to try for a third time to force May’s deal through parliament on Tuesday. However, with Tory support for her disappearing, her team will delay the vote if they conclude that she will be defeated again – an outcome that could see her forced to quit. Whips have warned her that defeat is all but certain. 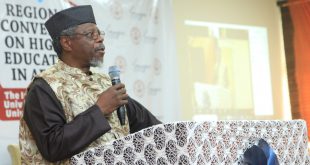