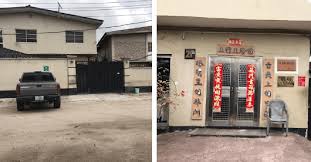 A Chinese restaurant in Lagos which reportedly claimed that it admits only Chinese nationals may be serving as a front for a criminal enterprise.

This view was shared by several Nigerians on Twitter, including one of Nigeria’s most influential online personalities and a former Director General of the Bureau for Public Service Reform, Dr. Joe Abah.

Abah in a Twitter post also urged the police to investigate the activities of the restaurant and its owners.

The Shi Shi Chinese Restaurant, located on 21B, Emina Crescent, Off Toyin Street, Ikeja, came into the spotlight after The PUNCH published a report on its infamous policy.

The newspaper had done the story based on a social media post that claimed that the restaurant does not admit Nigerians.

Abah’s tweet, which has already attracted hundreds of positive comments, read: “A lot of people are busy vexing that Nigerians are not allowed into Shi Shi Chinese Restaurant in Ikeja. Only Chinese people are allowed. I don’t know about you but the restaurant looks to me to be a front for a Chinese criminal enterprise. The police should go and take a look o.”

See a few other reactions below:

According to the report, a director at the restaurant confirmed that the outlet caters to only gentlemen, rather than to everyone.

He also claimed that, globally, Chinese restaurants are never open to “every Tom, Dick and Harry”.

The restaurant director, a Nigerian who introduced himself as Mr. Niyi Adegbite, declared that, generally, “all over the world, Chinese restaurants are not open to every Tom, Dick and Harry”.

When asked if Nigerians were allowed to patronise the restaurant, he reportedly answered, “Not really”.

Adegbite, however, claimed there are two sections in the restaurant – a regular one and one that is strictly for Chinese.

One of the victims, Blessing Ukeje, told The PUNCH that she had visited the restaurant along with four other friends around 8pm on a Saturday.

She said as they attempted to enter into the restaurant, the security guard told them that only persons with White skin or Black persons in the company of a White person were welcome.

Ukeje said, “On Saturday evening, about five of us were looking for a Karaoke restaurant and when we checked Google map, the name of the restaurant popped up and we all drove there. We were five.

“When we were about to enter, a guard asked what we came for and we responded that we were there for Karaoke.

“He told us that they didn’t have a Karaoke bar, while his colleague said they do, but that anyone who wants to be admitted must be in the company of a Chinese.

“He said Blacks are not allowed. That Blacks that come must come with Chinese people.

“We were all shocked because, even when we travel, we never see such. So, I asked him again if he was sure and he said that was the management policy.

“I actually thought I was dreaming. I asked him if he was okay with the policy being a Black man himself, but he didn’t respond.

“While we stood there, we saw Chinese people going in. Two Chinese ladies and two Chinese guys went in. It was after our experience that we decided to expose these people.”

Another victim, Obianuju Uba, said she was shocked when she was turned back at the gate.

Uba said she engaged the guard in an argument and even asked him if he was comfortable refusing to allow his countrymen to enter the restaurant.

She said when the guard refused to back down, she left with her friends.

Uba said, “I went with three of my female friends and two guys. On getting to the restaurant, we asked the security guard if there was Karaoke and he said they no longer hold Karaoke but only to eat. When we tried to go in, he said they don’t allow Blacks.

“So, I was confused because I had never experienced such in my life. I was shocked that a Nigerian – and not a Chinese man – was used as the guard. The guard even spoke with Yoruba accent, so I was sure that he was a Nigerian.”