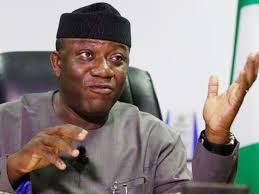 The State Attorney General and Commissioner for Justice, Mr Wale Fapounda, at a press conference, disclosed that persons currently standing trial for child defilement and those whom the Director of Public Prosecution adjudges to have a case to answer for the same offense will henceforth undergo compulsory psychiatry test.

Other measures, according to the Commissioner, include pasting of photographs of convicted sex offenders in prominent public spaces in their local government headquarters, uploading the sex offenders photograph on the website of the Ministry of Justice.

Such sex offenders would also have their photographs shown on the state-owned television station and their names announced on state radio, in an apparent move to name and shame them.

Fapounda said the state came up with these new measures, when previous measures, which include aggressive prosecution of sex offenders, opening of sex offenders register and disqualification from prerogative of mercy appeared not sufficient enough to curb the scourge.

He said the Dr. Kayode Fayemi-led administration had zero tolerance for sexual violence and would do everything possible to protect women and children against the scouge, which is fast becoming rampant in the state.

Fapohunda who admitted that prosecution alone would not end the social malaise which is now almost becoming a trend in Ekiti State, said the Ministry would also issue an advisory to the traditional ruler of the sex offender’s community on the status of the offender.

“Today, I am announcing new measures aimed at curbing sexual violence in the State. The State Government is concerned about the frequency of reported cases of sexual offenses. It has therefore become necessary to put in place proactive measures to halt this trend. So that there is no confusion, the measures that have been announced today refer specifically to the offenses of rape and child defilement”, he said.

The Attorney General stated further that the measures are aimed at protecting women and the girl child; adding that government is working to ensure that maximum penalties are placed on sexual offenders.

Fapohunda who noted that any sex offender who feels that the measures constitute a breach of his right can seek redress in a court of law. He added that the “victim-support strategy” is within the provisions of the 1999 constitution as amended.

“Government is aware that prosecution alone will not solve this problem. Therefore the Ministry of Justice will embark on public education and awareness including consultations with key persons and institutions in the state.

“So, there is no confusion, the measures that have been announced today refer specifically to the offences of rape and child defilement”, he added.