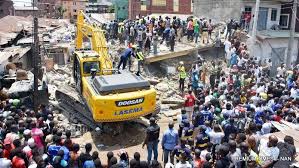 Many Trapped as Another Building Collapses in Lagos

March 19, 2019 Comments Off on Many Trapped as Another Building Collapses in Lagos 20 Views

While families are still mourning loved ones crushed to death by a collapsed building in Ita Faji on Lagos Island, another apparently defective building me down in the same area on Monday.

But the casualty figure was unknown at press time though people in the area said many people may have been trapped.

However, it was learnt that the building came down as officials of the Lagos State Building Control Agency were demolishing another house beside it.

The Director of the Lagos State Fire Service, Mr. Rasaki Musbau,  confirmed the incident, disclosing that fire fighters from the Sari Iganmu Division were promptly deployed to the area.

On his part, the Lagos State Police Public Relations Officer, Mr. Bala Elkana, said the police were yet to be informed.

“But I am aware that Lagos State is demolishing some houses,” he added.

The Head of Public Affairs Unit, Lagos State Emergency Management Agency, Mr Kehinde Adebayo, said the agency had received multiple calls from the area informing them of the situation.