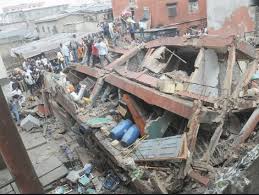 The recent collapse of a school building in Lagos which led to the killing of no less than 18 pupils while several others were severely injured was avoidable, hence those that have hands in the gory occurrence must be brought to book to stem the rising trend of avoidable deaths in Lagos State

This was the position of CEE-HOPE, a Non Governmental Organisation led by Betty Abah, human rights activist and social justice crusader

In a release, CEE-HOPE laid the blame of the heart rending incident on the doorsteps of the Lagos State Government and the owner of the ill-fated building who was said to have been served notice by government to vacate the premises since 2014.

According to Abah, care-free attitude in paying adequate attention to life threatening issues by government combined with callousness on the part of the owner of the property to cause the untimely death of the victims

Details of the release:

On the heel of yesterday’s school building collapse incidence on Lagos Island, we commiserate with families who have lost precious children and other family members.

According to media reports, about 18 persons, mostly children, have lost their lives while 41 were rescued with several of them sustaining various degrees of injuries including some life-threatening ones. These casualties, these heart-wrenching pains are clearly avoidable– a result of the pervasive lawlessness in our society.

We therefore ask for a speedy investigation and the consequent dispensing of the most stringent punishment for violators of building codes and regulations that led to this avoidable loss of lives.

A society is only taken seriously when there is adherent to set rules and regulations especially when it concerns safety of the most vulnerable, in this case children.

People are encouraged to commit crime when there are no adequate punishment from authorities to serve as deterrence. Over the years, Lagos has remained the epicenter of collapsed buildings in Nigeria owing to the use of sub-standard building materials or persons retaining old, decrepit and defective structures inspite of official evacuation warnings, and with all the attendant deaths of innocent persons (building site workers, tenants etc) yet there has never been any clear stand by the government to punish the defaulters other than stimulated media trials that fizzle with time.

We therefore have no hesitation in laying the blame for this tragedy partly at the feet of the Lagos State Government which has the constitutional mandate to secure lives and property of all Lagosians including school children aspiring to change their fortunes by acquiring an education, but has been largely negligent. The well-publicized albeit reactive emergency responses we have seen are not enough and clearly, cannot bring back the precious dead.

These violators (including the property owner who reportedly defied a quit order from the relevant authorities since 2014), the school authorities and other collaborators mustn’t be spared. Justice must be served without fear or favour.

Enough of these recurrent mass murders in Lagos State and by extension, Nigeria.