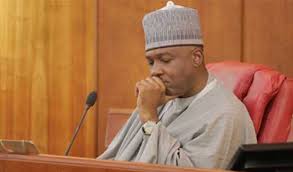 The Senate will begin the second reading and debate on the general principles of the N8.83trn 2019 budget  on Wednesday.

President Muhammadu Buhari submitted the document to the national legislature at a joint session three months ago but  the  lawmakers could not fully attend to  it due to the  elections.

The   Senate President, Bukola Saraki, told his colleagues during a brief plenary on Tuesday that  they would focus on the  fiscal document  beginning today.

The former Kwara State governor, who  lost his senatorial seat to Dr Ibrahim Oloriegbe of the All Progressives Congress in the February 23 poll, said, “We will commence the second reading and debate on the general principles of the budget tomorrow (Wednesday). So, colleagues, please put your names on the list.”

Saraki also informed the chamber that the Chairman of the Senate Ad hoc Committee on the New National Minimum Wage Bill, Senator Sola Adeyeye, would not be available  to work on  the bill for now.

In his place, Saraki named the    Deputy  Senate Majority  Whip, Francis Alimikhena, as the new head of the committee in an acting capacity.

Saraki urged members of the panel to work on the document and submit their report on  Tuesday.

The development has further delayed the passage of the bill, which has already been approved by the lower chamber of the National Assembly before the  elections.

Motion for the adjournment was moved by the Senate Leader, Ahmad Lawan,  and seconded by the Minority Leader,  Biodun Olujimi.

In line with parliamentary practice, the Senate adjourned plenary till Wednesday in honour of a member of the House of Representatives, Temitope Olaoye, popularly known as  Sugar.

The lawmaker, who represented Lagelu/Akinyele Federal Constituency,Oyo State, died after he was reportedly shot  by unknown gunmen in Ibadan during the March 9 governorship and state  House of Assembly elections.