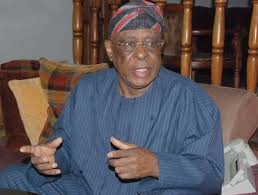 Former governor of Ogun State, Aremo Olusegun Osoba, on Sunday, reiterated his call for the redeployment of the Ogun State Commissioner of Police, Mr. Ahmed Iliyasu, for his inability to arrest and prosecute those who were throwing objects towards the VIP stand during President Muhammadu Buhari’s campaign rally in Abeokuta, the Ogun State capital, penultimate week.

Osoba, also a chieftain of the ruling All Progressives Congress, APC, decried the inaction of the police over two weeks after the ugly incident, a situation he blamed on alleged incompetence on the part of CP Iliyasu.

The former Ogun State Governor had, first, made the call, on Saturday, shortly after casting his vote at his polling unit, Ward 14, Unit 15 in Ibara Housing Estate, Abeokuta, the Ogun State capital.

The media guru, who voted at about 11.12 p.m. at the centre, submitted that the police chief had shown gross incompetence in keeping the state safe.

“If he is competent, why is it that nobody has been arrested more than two weeks after the APC rally in Abeokuta?”, Osoba had asked on Saturday.

“His men overwhelmed those on the campaign ground and should have rounded up all those from where the stones were coming from. But no single person has been arrested in connection with the attack on President Muhammadu Buhari and Vice President Yemi Osinbajo,

“I am saying this as an elder statesman in the state. He is a failure as Commissioner of Police in Ogun state.

“Every day, they are tearing the posters of the Commander -in- Chief and as Commissioner of Police, you have not done anything or arrested anybody.

“The man should get out of Ogun State. If anything happens today or anybody is injured or there is chaos anywhere, I will hold Iliyasu responsible for it.

“He should of his own volition asked to be excused from the state.

“We are being provoked. We have no confidence in him.

“Why is Iliya being protected over and over again? He was given signal to leave, he didn’t leave! Is that discipline?

“We are not going to allow anybody to use him to condone indiscipline here”.

Aremo Osoba was not done yet. He also accused the police boss of covering up for hoodlums.

“I have told Mr. President Buhari severally before the election that this man is covering up for hoodlums and that I don’t have confidence in him.

“Who then is protecting Iliya? Must Iliya be Commissioner of Police here by force?”

Share
Previous At Last, Kalu Wins Senatorial Seat
Next Yakubu Dogara Wins, Says: I have broken a jinx in House of Reps