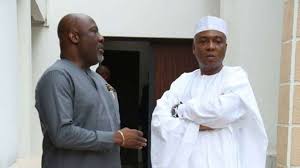 Dino Melaye has defeated Smart Adeyemi of the All Progressives Congress (APC) to retain his Kogi west senatorial seat.

Emmanuel Bala, returning officer of the election, announced the results in Lokoja, capital of Kogi, the early hours of Monday. He declared that Melaye polled 85, 395 votes to defeat Adeyemi, who scored 66, 901 votes.

Melaye contested under the platform of the Peoples Democratic Party (PDP). Although he won the 2015 election under the APC, he defected to the PDP following a crisis with the leadership of the ruling party.

Adeyemi, who was then in the PDP, was Melaye’s rival in the election.

Meanwhile, his friend and incumbent senate president, Dr. Bukola Saraki, who represented People Democratic Party(PDP) has lost his bid to return to the senate to former majority leader in the state assembly Dr. Ibrahim Oloriegbe of All Progressives  Congress.

Share
Previous Yakubu Dogara Wins, Says: I have broken a jinx in House of Reps
Next Buhari Wins Osun in Close Race