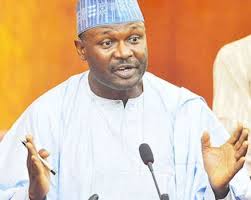 The chairman of the Independent National Electoral Commission, INEC, Prof. Mahmood Yakubu has announced that contrary to rumour, the Commission has not cancelled any election so far in any part of the country where the presidential and National Assembly polls had held.

The INEC boss stated this during a press briefing held at the National Collation Centre in Abuja on Sunday.

Answering reporters’ inquiry about alleged cancellation of the elections in the Federal Capital Territory, Abuja, he said the Commission had not received any report to that effect.

“The declaration of elections null and void is the responsibility of the judiciary”, he stated.

Yakubu also pleaded with the social media to be circumspect in the announcement of results.

He said: “I have read the election results so declared in the social media. They will write that a particular candidate has been declared winner. But if you read further, they will say he won in his polling unit.

“I appeal to the social media to be circumspect in the way they report election results. We don’t support censorship.”, he said.

Meanwhile, INEC has launched the collation center for the 2019 Presidential and National Assembly elections in Abuja. The collation of results will officially start by 11 am on Monday.