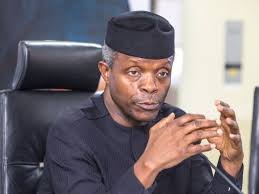 February 21, 2019 Comments Off on Osinbajo Denies Rumours of Resignation 21 Views

Vice President Yemi Osinbajo has denied rumours making the rounds that he has resigned from office in protest against his exclusion from the security meeting President Muhammadu Buhari held with Service Chiefs, yesterday, at the Aso Villa in Abuja.

Osinbajo denied the rumours in a Twitter post, accompanied by a video recorded at a meeting with young Christian leaders in Lagos yesterday night.

Osinbajo in the video described reports of his purported resignation being circulated on some social media platforms as deliberate propaganda, while also warning the citizens about the danger of fake news.

He said: “They are deliberate propaganda. Today (Wednesday), they’ve been spreading some information around that I’ve resigned. They said I didn’t attend a security meeting yesterday. I was too busy in my office. The same security people were meeting with me that same evening. Must I attend every meeting? Can’t the President hold a meeting with the security chiefs without me? They said I was so angry that they didn’t bring me to that meeting, that I was excluded, then I resigned! I have not resigned.”

The Vice President, in the tweet, said the greatest threat to the 2019 general elections is fake news and urged the electorates to be wary of it.

“Misleading/FAKE news is on the rise especially in this season when Nigerians will make a choice about who will govern them for the next four years.

“I remain committed to the service of the Nigerian people under the leadership of President Muhammadu Buhari.”

Share
Previous Why Igbos Should Vote for APC in Lagos – Tinubu
Next Murder Trial of Danish: Lead Defence Counsel, Supo Shasore Seeks Thorough Investigation By Police For Justice To Prevail