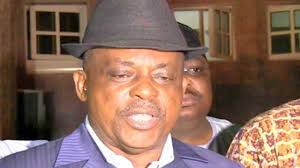 The opposition Peoples Democratic Party has sent a strong response to President Muhammadu Buhari over his statement that ballot box snatchers during this year’s general elections would be doing so at the expense of their lives.
Buhari made the now controversial statement in his address at the National Executive Committee meeting of the All Progressives Congress in Abuja yesterday.
The Chairman of PDP, Uche Secondus, in his opening address at the party’s National Executive Committee meeting currently holding in Abuja, asked the president to remember that he is not God, hence, does not possess the power of life and death.
The statement by Secondus also appeared to be a reaction to another statement credited to Buhari in an interview in his hometown Daura, last Saturday, that no one could unseat him in this year’s election.
Secondus said: “Buhari you’re not God. God will unseat you,” while also adding: “Someone was president before you, someone will be president after you.”
Further chiding Buhari, Secondus described the directive the President gave to the security forces to be ruthless with ballot box snatchers as illegal and inappropriate.
Also speaking at the meeting, Speaker of the House of Representatives, Yakubu Dogara, described the President’s directive to the security forces as “an unlawful order, which no professional soldier or policeman will obey”.

Share
Previous INEC Shifts Ground, Lifts Ban on Campaign
Next A MUST-READ ANALYSIS OF 2019 ELECTIONS BY PREMIUM TIMES: HOW THE BATTLE WILL BE WON AND LOST