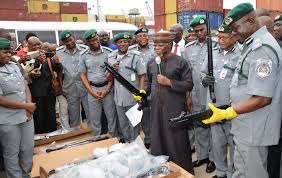 The Nigeria Customs Service, NCS, on Sunday, defended the shooting of a Nigerian man over an alleged N5000 bribe.

The service, in a statement signed by its public relations officer, DC Joseph Attah, said the shooting was accidental and the victim was a friend of the Customs Department who usually gave its men water.

A video of the tragic event had gone viral on social media, on Sunday, showing the Customs officer in what looked like a scuffle with the victim. Then, the officer suddenly fired the man. And the man died on the spot.

The incident, the NSC confirmed, occurred at the Shagamu interchange along the Lagos-Benin Road.

The video of the tragic shooting showed some passengers of a white Toyota Hiace bus, who had apparently been stopped by a Customs patrol team along the highway road, screaming in raw horror even as the victim lay dead on the sand.

Moments before he was shot dead, the victim could be heard, arguing with the armed officer, telling the Customs man he was a Nigerian. It wasn’t clear, from the clip, what the matter was. But the trigger-happy Customs officer could be heard threatening to shoot the man while another officer urged him on, saying: “Shoot him.”

And in twinkle of an eye, the deed was done.

Moments after the shooting, other passengers were seen trying to prevent the shooter from bolting. One officer, who clutched a gun, was seen standing over the victim. As shown in the video, the officer raised the dead man’s hand, apparently trying to verify if he was dead.

The officer was joined by his colleagues who attempted to put the dead man into their patrol van. But the brave passengers resisted them.

Defending their man, the NCS, in the statement, said the shooting was accidental.

“Contrary to some narrative,” DC Joseph Attah declared in the statement, “the young man was not a passenger of the bus but a good citizen who always comes to fetch water for Customs patrol men anytime they return to base.”
A Customs officer trying to verify if victim was dead

Below is the full text of the statement:

The attention of the Nigeria Customs Service has been drawn to a disturbing video going viral with conflicting narratives.

While it is painful and totally unnecessary to lose lives in anti-smuggling operations, today at Sagamu Interchange along Ijebu Ode, attempt to obstruct lawful performance of duty by passengers of a commercial bus (a white Toyota Hiace) suspected to be carrying bales of used clothing led to the death of a young man (Godwin) and serious injury of a Customs Officer ASC 1, Destiny Onebanho.

Contrary to some narrative, the young man was not a passenger of the bus but a good citizen who always comes to fetch water for Customs patrol men anytime they return to base.

Preliminary findings indicate that it was during the skirmishes and struggle to disarm the officer that the rifle discharged and the friend of the Customs (Godwin) who lost his life.

The Service is already in touch with bereaved family.

Sadly, it should be noted that while attention shifted to the dead and the wounded, the passengers who filmed with incited commentary boarded their vehicle and left, leaving the wrong impression that it was one of them that was killed.

While the wounded officer is under intensive care at the hospital, the patrol team has been recalled to the office for further investigation.

For: Comptroller-General of Customs