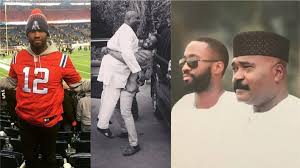 Lucky Igbinedion Loses Son, Nephew in Car Crash in US

February 17, 2019 Comments Off on Lucky Igbinedion Loses Son, Nephew in Car Crash in US 73 Views

The family of former Edo State Governor, Chief Lucky Igbinedion, has been thrown into deep mourning following the death of his second son, Osaretin Igbinedion, and nephew, Esosa Onyemwense, in a fatal car crash in the United States.

Osaretin and Esosa, his cousin, died in Houston, Texas, in the wee hours of Saturday, February 16, when his car ran into an 18-wheeler vehicle.

Osaretin graduated from the University of Pittsburgh’s College of Business Administration with a degree in marketing, and a minor in economics. He also had a Master’s degree in International Management from the Northeastern University.