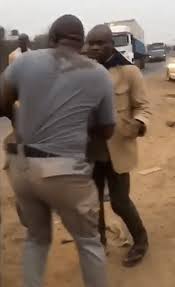 A customs officer allegedly shot dead a man who just returned from Europe and was on his way to the Eastern part of the country in Lagos early this morning.

It was learnt that a team of Customs officers had flagged down a commuter bus in which the victim and some fellow returnees were travelling on the Lagos-Ibadan expressway and demanded N5000 bribe from a female passenger because of some luxury goods found among her baggage.

The passengers, however, resisted the attempt to extort her, insisting that none of the goods was contraband because they all arrived through the airport where their luggage had already passed through Customs checks.
The officer who allegedly fired the fatal shot.

Their insistence had reportedly annoyed one of the Customs personnel who cocked his rifle and threatened to shoot the most vocal among them.

He, however, mistakenly shot one of them in the process, with the bullet penetrating through one of the victim’s eyes.

The victim reportedly died on the spot, while the officers attempted to flee in their operational vehicle but were stopped by the remaining passengers and other eyewitnesses.

A video of the incident showed a mob attempting to lynch the Customs officer who fired the shot but did not show what eventually happened to him.