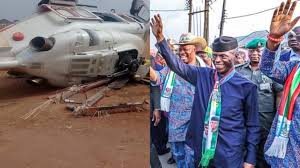 The Accident Investigaation Bureau, AIB, has come up with findings on the cause of the accident involving the chopper conveying Vice President Yemi Osinbajo, some aides and crew members, attributing it to human error.

According to the agency:” At about 14:34 hr, the helicopter touched down hard on the right main landing gear and rolled over to the right.

“The crew carried out Emergency Landing Procedures which included immediate engines shutdown, fuel shut OFF, battery switch OFF, and generators switch OFF.
AIB also noted that: “All occupants of the helicopter were evacuated uninjured. 17. The helicopter was substantially damaged.
Here is the full text:

1.0 FACTUAL INFORMATION
1.1 History of the flight
On 2nd February, 2019 at about 07:26 h, an AgustaWestland (AW139) helicopter with nationality and registration marks 5N-CML owned and operated by Caverton Helicopters Limited departed Murtala Mohammed International Airport Lagos, for Nnamdi Azikiwe International Airport Abuja, to conduct a chartered VIP flight from Abuja to Okene via Kabba and then return to Abuja. The positioning flight to Abuja was uneventful.
At about 13:46 h, the helicopter departed Abuja runway 22 for Kabba, Kogi State on a VIP chartered flight Nigeria 002 (NGR002), on a Visual Flight Rule (VFR) Flight Plan with 12 persons onboard, including the Vice President of the Federal Republic of Nigeria, his entourage and three crew members (Captain, Co-Pilot and an Engineer). The fuel onboard was 1,268 kg. A squawk code of 1301 was given by the Air Traffic Control (ATC) for radar monitoring. The Captain was the Pilot Flying (PF) while the Co-pilot was the Pilot Monitoring (PM).
The Flight Data Recorder (FDR) data indicated that the take-off and climb out phase was normal; and the helicopter levelled off at a cruising altitude of 5,000 ft flying with autopilot coupled. During cruise at 14:20 h, the Multi-Purpose Flight Recorder (MPFR) light came ON indicating that the recorder had stopped recording and the Crew Alerting System (CAS) displayed FDR and CVR Fail. Subsequently, the Caverton Helicopters Quick Reference Handbook (QRH) procedures were accomplished which advised that the flight should continue. The helicopter was monitored on Abuja Approach Radar until 55 NM to Kabba, when the helicopter began descent.
During post-accident interview, the crew stated that on initial approach, they carried out pre-landing checks which included a landing brief for a ground helipad landing and a Landing Decision (or Committal) Point (LDP) of 100 ft/ 20 KIAS based on the surrounding obstacles and masts.
Meanwhile, another helicopter, (Bell 412) with nationality and registration marks 5N-PEJ operated by the Nigeria Police Force (NPF) conveying the advance party, established radio communication with NGR002 just before the MPFR failed. The police helicopter landed in the stadium at 14:30 h ahead of NGR002.
The crew of NGR002 stated that they sighted the stadium as a result of the brown dust generated by the downwash of the police helicopter main rotor. The crew further stated that the approach was normal.
After identifying the stadium, both flight crew members agreed on the selected landing spot within the stadium. The NGR002 got into hover to land and at 50 ft above ground level, a brownout1 set in. The crew lost visual contact with the ground and elected to use the Instantaneous Vertical Speed Indicator (IVSI) and Radio Altimeter (RAD ALT) to control the descent. The Co-Pilot began RAD ALT Callouts “35, 30, 25, 20 and 15”. After the RAD ALT 15 Callout, neither the CoPilot nor the Captain could remember making or hearing further callouts. At about 14:34 h, the helicopter experienced a hard landing on the right main landing gear and rolled over to the right.
The Captain immediately shut the engines while the Co-Pilot shut off the fuel. The flight crew could remember executing the emergency landing procedures, which included switching off the battery and the generators.
According to the weather report obtained by Nigerian Airspace Management Agency (NAMA), the prevailing weather at the stadium was good (CAVOK).
All persons on board were evacuated uninjured. The accident occurred in day time in an Instrument Meteorological Condition (IMC).
1.2 Injuries to persons
Injuries Crew Passengers Total in the aircraft
Others
Fatal Nil Nil Nil Nil
Serious Nil Nil Nil Nil
Minor Nil Nil Nil Nil
None 3 9 12 Nil
1 Brownout in helicopter operations is an in-flight visibility restriction caused by dust or sand in which the flight crew looses visual contact with nearby objects that provide the outside visual references necessary to control the helicopter near the ground.

1.10 Aerodrome Information
The Kabba football stadium is an unpaved field. It has the elevation of 1500 ft (457 m) above mean sea level and located at about the coordinate 07°50’32”N 06°04’42”E.
1.11 Flight Recorders
The helicopter is fitted with a low weight Penny & Giles Aerospace MultiPurpose Flight Recorder that has combined Cockpit Voice and Flight Data recording capabilities. It offers a variety of features including voice recording for up to 120 minutes and 25-hour flight data recording capability.
The Flight Recorder has the following particulars:
The Multi-Purpose Flight Recorder was retrieved from the wreckage and taken to the AIB Flight Safety Laboratory in Abuja. The flight recorder voice and data has been downloaded and is awaiting analysis.
1.12 Wreckage and Impact Information
The five main rotor blades separated from the rotor head and were destroyed, and debris was distributed within the football stadium. The right main landing gear was damaged, the right horizontal stabilizer was damaged, and the tail rotor blades suffered multiple damage, but the assembly remained intact. The life raft deployed while the left and the right floating devices did not deploy.
Manufacturer Penny & Giles Aerospace Ltd.
Part Number D51615-142 Issue 02
Serial Number A09296-001
Manufacture date July 2014
S/W Reference SW110522

1.13 Medical and Pathological Information No medical or pathological tests were conducted. 1.14 Fire There was no pre or post impact fire. 1.15 Survival Aspect The accident was survivable as there was liveable volume of space in the cabin. There was no fire and rescue and evacuation were timely.
1.16 Test and Research Nil at this point in time.

Initial Findings 1. The helicopter had a valid certificate of airworthiness. 2. Caverton Helicopters Limited did not conduct site survey of the landing field prior to this flight. 3. Caverton Helicopters Limited did not carry out safety and risk assessment of the landing area prior to dispatch of the flight. 4. The helicopter hovered to land in a brownout condition. 5. Drug and alcohol test for the crew could not be carried out. 6. The flight crew were properly licensed and adequately rested to operate the flight. 7. The Captain was the Pilot Flying (PF), and the Co-pilot was the Pilot Monitoring (PM). 8. The take-off, climb out, cruise and approach phases were normal. 9. During cruise at 5,000 ft and at about 10 minutes to touchdown, the crew noticed the flight recorder light on the Crew Alerting System (CAS) come ON. Quick Reference Handbook items were accomplished. 10. Another helicopter operated by Nigeria Police Force (Bell 412; 5N-PEJ) landed ahead of NGR002. 11. The crew briefed on landing in brownout and used the Company’s Brownout Landing Procedures. 12. During the landing, at about 50 ft to touchdown, a heavy brownout enveloped the helicopter and the crew lost visual contact with the ground. 13. The Co-Pilot called out radio altimeter 35, 30, 25, 20, 15 and no more. 14. At about 14:34 h, the helicopter touched down hard on the right main landing gear and rolled over to the right. 15. The crew carried out Emergency Landing Procedures which included immediate engines shutdown, fuel shut OFF, battery switch OFF, and generators switch OFF. 16. All occupants of the helicopter were evacuated uninjured. 17. The helicopter was substantially damaged.

Immediate Safety Recommendations
1.0 Immediate Safety Recommendation 2019-002 NCAA should issue an Advisory Circular to all helicopter operators flying in Nigeria to be alert of the possibility and the effect of brownout. Appropriate procedures should be put in place to mitigate its effect(s).
2.0 Immediate Safety Recommendation 2019-003 Caverton Helicopters Limited should ensure that flight operations are carried out in accordance with the company’s approved operations manual, vis-a-vis site survey and proper safety risk analysis are done before dispatching any helicopter to unapproved landing pads.
Outstanding Investigation 1. Analysis of the data from Cockpit Voice Recorder information and Flight Data Recorder (FDR). 2. Analysis of the data from Health and Usage Monitoring System (HUMS), Flight Data Monitoring (FDM) and other non-volatile memory devices. 3. Further interviews of witnesses. 4. Further inspection of the wreckage.

Share
Previous My Ambition Is Not Worth The Blood Of Any Nigerian- Atiku
Next Breaking! Tribunal orders the arrest of Justice Onnoghen