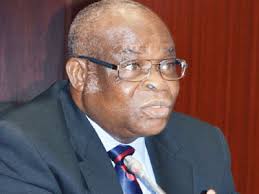 The National Judicial Council (NJC) has set up a preliminary complaints assessment committee to review the responses given to it by the suspended Chief Justice of Nigeria, Walter Onnoghen, and the Supreme Court Justice Ibrahim Muhammad who is acting in his stead.

Onnoghen is accused of failing to fully declare his assets, while Muhammad is facing allegations of misconduct in allowing himself to be sworn in as a replacement for Onnoghen, whose suspension by President Buhari critics say violated the constitution.

Both men are being investigated by the NJC as required by the law.

The council sat on Monday and was expected to give its verdict after hearing the responses of the two accused judges. Both had been given seven days to respond to the allegations against them.

A spokesperson for the NJC, Soji Oye, said in a statement Monday that the NJC reconvened and resolved to constitute into the Preliminary Complaints Assessment Committee in accordance with Regulation 17 of the National Judicial Council Judicial Discipline Regulations, 2017.

The committee is to report its finding to the council on February 13 when it will reconvene.

“Council also received a new petition written by the Economic and Financial Crimes Commission (EFCC) against Hon. Mr. Justice W.S.N. Onnoghen, GCON and forwarded it to him for his response within seven (7) working days,” Mr Oje said.

The petition against Onnoghen was written by members of a group, Resource Centre For Civil Education, while the allegation against Muhammad was written by a former Nigerian Bar Association, Olisa Agbakoba, and another group, Centre for Justice and Peace Initiative.

Onnoghen was suspended on January 25, 11 days after his trial on alleged false asset charge began at the Code of Conduct Tribunal on January 14.

If both officers are found liable by the council after today’s meeting, the consequence may include the appointment of a new CJN for the country.