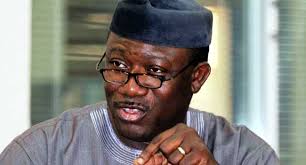 The Governor had last month approved a hundred per cent increase in monthly gratuity payment from N10 million to N20 million.

However, taking into consideration the current plight of many retired workers, who could not access their gratuity several years after their retirement owing to the paltry amount for gratuity payment, Governor Fayemi has directed the Ministry of Finance to further increase the monthly gratuity payment to N100 million per month. This was the amount paid per month during his first term.

According to a statement by the Chief Press Secretary to the Governor, Yinka Oyebode, the directive takes immediate effect, pending the time the state government would be able to find a creative approach to resolve the huge outstanding gratuity obligations of the state.

The Governor believes the increment will go a long way in ameliorating the plight of the state’s pensioners.

In a related development, Governor Fayemi has also approved the payment of severance allowance and outstanding salaries of 19 former members of the Ekiti State House of Assemblies and their aides who were denied their entitlement by the immediate past administration of Mr Ayodele Fayose.

Governor Fayemi believes it is unjust to deny workers their wages, saying that his administration will ensure that workers and pensioners get their entitlements as and when due.