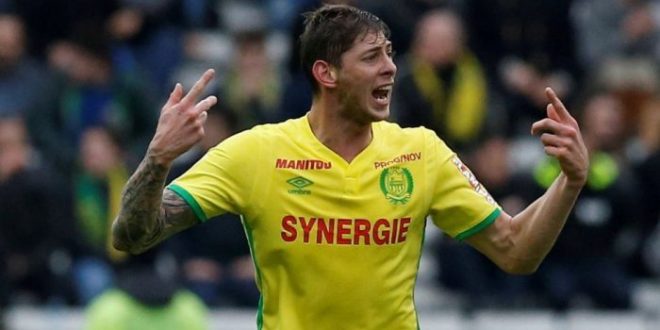 The wreckage of the plane that vanished with the footballer Emiliano Sala on board has been found within hours of a search starting in the sea off the Channel Islands; The Guardian of London has reported.

A search boat hired privately by Sala’s Argentinian family – thanks partly to a crowd–funding appeal – located the wreckage on Sunday morning.

The crew passed the details of the location on to government investigators, who used a remotely operated underwater vehicle (ROV) to examine the spot.

There was no immediate official confirmation of what was found but the shipwreck specialist leading the private investigation, David Mearns, said the plane had been discovered.

He said it had been located by the privately hired vessel FPV Morven, which had passed the information on to the UK Air Accidents Investigation Branch (AAIB). Mearns said the AAIB had moved its vessel, the Geo Ocean III, to the spot and visually identified the wreckage with an ROV.

He said the family of Cardiff City striker Sala and the pilot, David Ibbotson, had been informed and the AAIB would be making a statement on Monday. It is believed it will be up to the AAIB to recover the vessel.

No information about whether any bodies were in the plane was given. Two seat covers from the aircraft washed up last week on the coast of France.
Flowers, messages and candles for Sala in Nantes

Mearns tweeted: “Wreckage of the plane carrying Emiliano Sala and piloted by David Ibbotson was located early this morning by the FPV MORVEN. As agreed with the AAIB they moved the GEO OCEAN III over the position we provided them to visually identify the plane by ROV.”

In a second tweet he said: “The families of Emiliano Sala and David Ibbotson have been notified by Police. The AAIB will be making a statement tomorrow. Tonight our sole thoughts are with the families and friends of Emiliano and David.”

The Piper Malibu N264DB carrying 28-year-old Sala and Ibbotson, 59, from Lincolnshire, disappeared over the Channel on 21 January after leaving Nantes in France at about 7.15pm for Cardiff.

Earlier on Sunday, Mearns, who claims to have located 24 major shipwrecks during his career, said he would be leading a team of seven others on the vessel FPV Morven.

He said the search was being carried out “in close coordination” with the AAIB. The plan was to cover an area of about four square nautical miles over three days.

Mearns and his team had been confident the plane would be found. The area of seabed that was being searched, north of Guernsey, was not very deep – about 65 metres – and was stony and bare because it had been dredged by scallop fishermen. Mearns has said the currents are strong and there are other wrecks there, which made it more tricky.

During the journey, the plane had requested to descend, but then it lost contact with Jersey air traffic control.

An official search operation was called off on 24 January after Guernsey’s harbour master, Captain David Barker, said the chances of survival following such a long period were “extremely remote”.

The termination of the search caused an outcry, with supporters of the family – and footballers including Sala’s compatriot Lionel Messi – calling for the search to be resumed.

The Argentinian embassy in London also tried to put pressure on the UK government to do more.

On Wednesday, the AAIB confirmed it had commissioned a Ministry of Defence salvage and marine operations team to try to locate the plane. It insisted that as soon as it was informed of the crash, it had been looking at the possibility of a seabed search.

The start of search was delayed by the poor weather. But the fact that the plane has apparently been found so quickly will raise questions over whether it could have been launched within the first few days.

Both the AAIB and Sala’s private searchers have said they will work together.

The Guardian of London