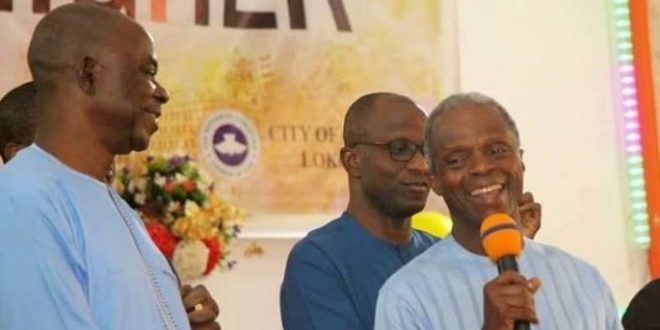 Vice President Yemi Osinbajo showed uncommon strength and inscrutable faith as he headed to church, on Sunday, to offer praises to God for saving him and his delegation from probable death in Saturday’s helicopter crash in Kabba, Kogi State.

He danced and sang his heart out at a thanksgiving service held at the Redeemed Christian Church of God, Phase 11, Lokoja, the Kogi State capital.

Speaking at the service, he attributed his narrow escape from death to the infinite mercies of God and a special prayer of protection that Pastor Enoch Adejare Adeboye said for him last Friday.
Osinbajo at the thanksgiving service on Sunday (Photo credit-The Nation online)

“I was at the Redemption Camp, last Friday, although I came late,” Oosinbajo told the congregation. “After the vigil, Papa Adeboye called me and asked how the campaign was going, and I told him it was going well. He then prayed for me and specifically said ‘God, you know how dear this my son is to me, please protect him.’

“He said the prayers continuously for more than five times. I believe God must have listened and decided to save my life and those in my entourage.”

Osinbajo, therefore, advised the congregants to heed the Bible’s instruction and pray ceaselessly. There is enormous power in prayers, he said.

“Whether or not the devil likes it,” he continued, “we are moving to the next level,” adding that no amount of praises and thanksgiving would be sufficient to praise God for the miracle He wrought in his life and the lives of his delegation members on Saturday.

“Only God can take the glory for saving my life and those of the others on board,” Osinbajo said, singing God’s praise still.

The Vice-President said it would have been breaking news on local and international media that he and others had died in the crash but God did not allow such to happen.

“No amount of thanksgiving and praises to God would be enough for saving my life and nine others on board. God is the one, who can do all things, and only Him can take the glory; we return the glory to Him.

“We are here to say thank you. Thank you, Jesus. We bless His name forever and ever,” he said.

He prayed God to bless all the people that had celebrated with him in Kogi State, the nation and the world at large.

Among eminent Nigerians that attended the thanksgiving service were: Speaker, Kogi House of Assembly, Hon. Matthew Kolawole; Secretary to the Kogi State Government, Dr. Ayoade Arike; Special Adviser to the Governor on Security, Mr. Jerry Omodara; Senator Smart Adeyemi; some commissioners, chieftains of the All Progressive Congress in Kogi State and other top officials of the state government. .