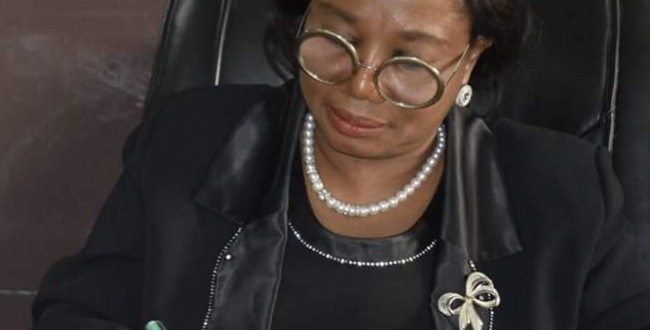 A heated courtroom exchange occurred on Wednesday between Justice Sherifat Solebo of an Ikeja Special Offences Court and Mr Dele Oloke, the Chairman of the Ikeja branch of the Nigerian Bar Association (NBA) over the court boycott organized by the National body of the lawyers.

Oloke had at 10.17am, led an NBA taskforce to stop the proceedings of Justice Solebo’s court in an attempt to enforce the court boycott directive of the NBA.

But the judge would not tolerate the disturbance of her court as she raps the NBA chairman: “I would entertain any interruption of my court. We know the rules of court, Mr Oloke be properly guided!, she warned.

Justice Solebo continued: “The National Judicial Council (NJC) has not directed that judges should not sit, the Judiciary Staff Union of Nigeria (JUSUN) has not shut the door.

“I am still in charge of this court, Mr Oloke, what you are doing is contemptuous,” Justice Solebo said.

Following the judge’s outburst, the NBA Ikeja Chairman told lawyers who were in Justice Solebo’s courtroom to obey the boycott directive of the NBA and leave the courtroom.

Some judges at the Ikeja High Court continued to sit despite the boycott directive of the NBA.

The national body of the NBA, via resolution at its National Executive Council meeting held on Monday, Jan. 28 had resolved to embark on a two-day boycott of courts on Jan. 29 and 30.

The boycott is to protest the suspension of Nigeria’s Chief Justice, Walter Onnoghen.

Earlier at 9.56am, the NBA team were unable to stop the proceedings of Justice Sururat Soladoye of an Ikeja Domestic Violence and Sexual Offences Court as the judge was about to rise from proceedings for the day as the team stormed her courtroom.

The proceedings of Justice Mojisola Dada of a Special Offences Court could not be also interrupted at 10.42am by Oloke and his team because the judge was delivering a judgment at the time.