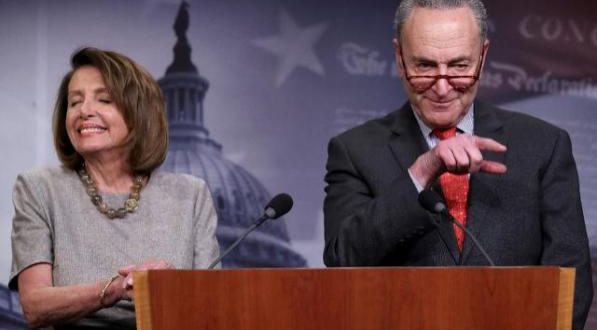 January 26, 2019 Comments Off on Democrats Declare Victory in Shutdown Battle with Trump 68 Views

Democratic leaders in Congress declared victory Friday in a successful negotiation to reopen the US government after a record five-week closure — and took the opportunity to chide President Donald Trump for taking so long to reach a deal.

“Hopefully now the president has learned his lesson,” Senate Minority Leader Chuck Schumer told reporters shortly after Trump announced a deal that would temporarily reopen shuttered federal agencies, but does not include funds for the president’s long-requested border wall.

The partial government shutdown, the longest in American history, “will finally end today,” Schumer said, after the Senate and House quickly pass the legislation and send it to the president’s desk for his signature.

In the end, it was Trump who backed down in the 35-day battle of wills with his Democratic opponents in Congress, notably including Nancy Pelosi, the speaker of the House of Representatives.

Pelosi joined Schumer in commending the deal but stopped short of reveling in seeing Trump drop his previous insistence on border wall funding.

“It’s sad, though, that it’s taken this long to come to an obvious conclusion,” she said.

“Disagreement in policy should never be a reason to shut down government.”

Democrats stood firm — and, importantly, largely united — in their opposition to funding for the wall on the US-Mexico border, which Trump insists is needed to tackle illegal immigration.

Border reinforcement will be a pivotal issue as both sides negotiate a deal in the coming weeks that will address border security and fund government through the remainder of the fiscal year.

Pelosi said she remained “optimistic” that a long-term deal will be reached.

Trump’s retreat clearly reinforces Pelosi’s reputation as a master political tactician, but she did not gloat.

“I don’t see this as any power play,” she said, declining to speculate on whether the president held out over wall funding to show who was in charge.

“Our unity is our power, and that is what maybe the president underestimated.”