Breaking News
Home / Opinion / In Kwara, the Boat is Rocking, By Dare Babarinsa 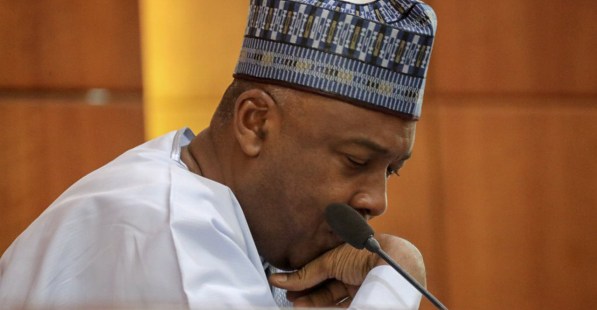 In Kwara, the Boat is Rocking, By Dare Babarinsa

January 25, 2019 Comments Off on In Kwara, the Boat is Rocking, By Dare Babarinsa 44 Views

Dr. Bukola Saraki, the President of the Senate, is not a candidate in the next governorship election in Kwara State, but it is his election. This is one election that would determine his future and that of the Saraki dynasty. There are about 35 governorship candidates vying for the election including Abdulrasaq Abdurrahman, the candidate of the All Peoples Congress, APC, and Rasak Atunwa, the candidate of the People’s Democratic Party, PDP. Both men were Saraki’s men in the days of old. Now it is only Atunwa of the PDP that is Saraki’s man.

Saraki wants to go back to the Senate where the current Governor, Abdulfataa Ahmed is also aiming to go. Both of them are running on the platform of the PDP. In the last general election, both Saraki and his governor were candidate of the APC. Now national politics and the drums of ambition has steered Saraki and his henchmen into a different course. His old comrades are now his dedicated opponents. The outcome of the coming election would prove whether Saraki has made the right choice.

Saraki is an inheritor of a vast political empire with deep tap roots. His father, Dr Olusola Saraki, was a medical doctor who made good friends during his practice in Lagos. He became wealthy and decided to go back home through the route of politics. It was a fortuitous decision which was to have great impact on millions of people and the careers of his descendants. He was elected into the Constituent Assembly from Ilorin, a city his father had adopted as his hometown. Saraki’s father was from Abeokuta, who after many years in Ivory Coast, returned to Nigeria and settled among the Oyo of Ilorin. His son was destined to dominate the city no other personage has ever done since soldiers, loyal to Malam Alimi, A Fulani peripatetic priest and medicine man, staged a coup against Afonja in 1837, igniting a Civil War that ultimately led to the collapse of Oyo Empire and the annexation of Ilorin into the Sokoto Caliphate. Alimi was originally an associate of Afonja, the Aare Ona-Kakanfo of Oyo Empire and the most senior of military commander of the Alaafin.

By the time Saraki was elected into the Constituent Assembly in 1978, Sokoto Caliphate had become history, but its impact remain portent and its influence pervasive. He believed that destiny had placed him at a vantage point, to bring a reconciliation between the Yoruba and the Fulani (and their mostly Yoruba soldiers and commanders) who had met on the battle fields during the 19th Century. He wanted to be President and flaunted his Arabic name, Abubakar, in the North and reminded the Yoruba of the West that he was Olusola. However the conservative leader of the North would not fully trust this new entrant. They elected Alhaji Aliyu Shehu Shagari from Sokoto as the presidential candidate of the National Party of Nigeria, NPN.

I remember Saraki now as the Leader of the Senate during the Second Republic. I was the National Assembly correspondent for the National Concord and everyone knew Saraki as one of the most powerful senators. He was a humble man, accessible, simple and never impatient. Unlike some of the big men of that era, his constituents and any other person could see him at any time and without any appointment. You could accost him anywhere to ask questions. He never seemed capable of losing his temper or to be in too much of a hurry. His affection for people was genuine as he radiated confidence and grace. His people adopted him as their own. He was not a man who was afraid of a good fight. Saraki, the father Kwara State politics had arrived.

The1983 general elections was to provide him with the opportunity to test his muscle. He had fallen out with Governor Adamu Attah whom he helped to installed in office in 1979 when General Olusegun Obasanjo handed over power to elected civilian leaders. Attah may have calculated that Saraki had no choice but to remain loyal to the NPN, but he miscalculated. During the governorship election, he led the posse against Attah by backing the candidate of the opposition Unity Party of Nigeria, UPN, Chief Cornelius Adebayo, a former lecturer who was Saraki’s colleague in the Senate. Adebayo won. Nobody dare take Saraki for granted again.

When Major-General Muhammadu Buhari seized power on December 31, 1983, Saraki was one of the scores of politicians arrested. He was thrown into prison and spent many months at Kirikiri in Lagos. He was accused of collecting heavy bribes from contractors. When General Ibrahim Babangida toppled Buhari in 1983, Saraki was one of those politicians freed. Though he appeared before the Justice Samson Uwaifo panel, he was never tried for his alleged malfeasance.

Saraki became close to the military boys and forged a special relationship with General Sani Abacha who seized power in November 1993 from the Interim Government of Chief Ernest Shonekan. Then Abacha died and Saraki again re-emerged as the dominant political force in Kwara politics during the Transition to Civil Rule programme of General Abdulsalami Abubakar. He ensured the victory of his candidate, Admiral Mohammed Lawal, former military governor of Ogun State, as the helmsman of Kwara State.

My friend and old classmate at the University of Lagos, the late Wale Oladepo, was Lawal’s Commissioner for Information. I visited Oladepo in early 1983 and he said his oga was facing a tough battle from his former mentor. By this time, Lawal was struggling for his political life. Saraki, one of the founding fathers of the All Peoples Party, APP, had made a strategic move that left Lawal gasping for breath. He left the APP for Lawal and pitched his tent with the powerful People’s Democratic Party, PDP, and got his son, Bukola Saraki, former managing director of the ill-fated Societe-General Bank, installed in the precinct of Aso-Rock Presidential Villa. In his fight against Lawal, he had recruited a powerful ally, Chief Olusegun Obasanjo, President of the Republic. The rest is history.

Now history is beckoning against to give its verdict. Since the family defeated Lawal in the epic battle of 2003, politics as the family business has been prospering. Bukola Saraki had spent eight years as the Governor and after that retired into the Senate where he clinched the coveted seat as the President in a classical coup against his party, the APC. Leading the charge against him now In Kwara is Alhaji Lai Mohammed, the Minister of Information and Culture who knew the potency of the Saraki sting. He once contested for the governorship seat and was worsted by the Saraki machine. Now is another chance.

But for the crisis in the APC which made Saraki to retrace his steps back into the PDP, this election would have be a no-contest for him. With the formation of the APC, most of his old political foes were now in the same camp with him. Lawal was dead and so were General Abdulkareem Adisa and General Tunde Idiagbon, former Chief of Staff Supreme Headquarters. General Abdullahi Mohammed, former Chief of Staff to President Obasanjo, seems to have retired from active politics. Brigadier General Theophilous Bamigboye, former military administrator of Osun State, seems not to gather enough steam for his ambition to become the governor of Kwara State. Then the national crisis in the APC rocked the boat.

For 40 years, the Saraki dynasty has proven its mettle in peace and crisis. It has weathered turbulent weather and occasional calm. It has exercised power and influence in an unprecedented manner. It has amassed a fortune and built for itself a formidable political empire envied by foes and friends alike. The coming governorship election would prove whether the Saraki Dynasty is staying the course or like the great Titanic, it is on its last voyage.