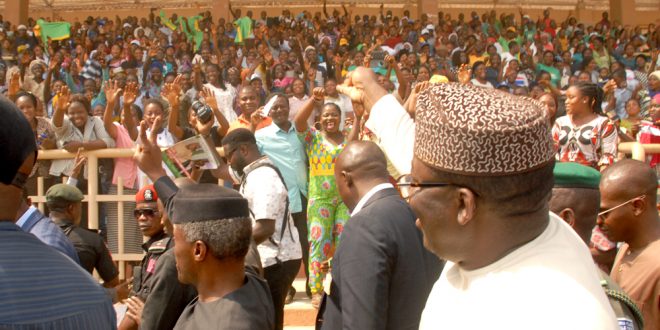 The Vice President, Prof Yemi Osinbajo, has launched the ‘Tradermoni’ loan scheme in Ekiti State with an assurance that the All Progressives Congress-led Federal Government would take Nigerians to the next level of prosperity if the party is re-elected.

Prof. Osinbajo who was welcomed to Ekiti Parapo Pavilion, Ado-Ekiti by thousands of artisans, traders and N-Power beneficiaries said the Small and Medium Scale Enterprise (SMSE) loan was initiated by the President Mohammadu Buhari-led government to empower the Nigerian masses who are into small scale businesses.

The Vice President who assured Ekiti entrepreneurs of government’s financial support for their businesses, disclosed that the Federal Government plans to set up an SME bank that will be responsible for providing loans for SMEs.

He said: “I want to congratulate all the business men and women here. I want to tell you that we will support you and give you the credit that is required, grants that are required to do your businesses well. The next level of our government, we are setting up an Entrepreneurship bank, a bank for entrepreneurs only to give loans to small businesses owned by young men and women.

“Before now, we used to do it through the Bank of Industry but now we will set up a special bank. We are also setting up a People Money bank. This is the bank that will give microcredit to business men and women.”, he added.

While urging Nigerians to support and re-elect President Buhari in the forthcoming presidential election, the Vice President said the Buahri-led government has been prudent with the country’s resources; saying that it had undertaken a lot of projects despite earning 60% less than what the previous government earned.

Osinbajo urged Nigerians not to be deceived by those who want to return to power in order to continue their looting of the nation’s resources having done so for 16 years.

Earlier, Governor Fayemi had said that his administration was prioritising workers welfare through prompt payment of salaries and pensions, adding that the Fayemi-led government believes in making life comfortable for the masses.

Fayemi who noted that some entrepreneurs have started benefitting from the SME loans in Ekiti State while others are still going to be included in the scheme said the scheme will add value to locally made products.

The governor urged Ekiti people to support the re-election bid of President Buhari so that the various social investment and social safety net programmes of the administration could continue.

He added that the team Buhari/Osinbajo is made up of a combination of integrity and competence which are the hallmarks that are needed to take Nigeria to greater heights.

Osinbajo and Fayemi later inspected the various exhibition stands, where they had one on one interaction with the exhibitors.

The Ekiti Parapo Pavilion, venue of the MSME clinic was turned into carnival as many people trouped in in with banners and bands to welcome the Vice President.

Earlier, the Vice President and Governor Fayemi had also paid a condolence visit to Iworoko Ekiti where a trailer crash claimed 12 lives last week before the death of the traditional ruler of the community.