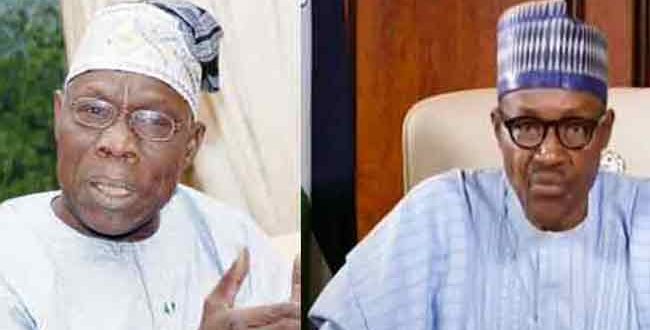 ‘Nigeria Is Back To Abacha Era Is Here’, Obasanjo Slams Buhari Again

January 20, 2019 Comments Off on ‘Nigeria Is Back To Abacha Era Is Here’, Obasanjo Slams Buhari Again 51 Views

Former President Olusegun Obasanjo has accused President Muhammadu Buhari of returning the country to the era when state institutions were used to fight perceived enemies of the government.

He made the allegation on Sunday while briefing reporters at his residence in Abeokuta, the Ogun State capital.

Obasanjo alleged that the President was putting into practice, the lessons he allegedly learned from late General Sani Abacha.

“Today, another Abacha Era is here.  The security institutions are being misused to fight all critics and opponents of Buhari and to derail our fledgeling democracy,” he claimed.

“EFCC, Police and Code of Conduct Tribunal are also being equally misused to deal with those Buhari sees as enemies for criticising him or as those who may not do his bidding in manipulating election results.”

RELATED
‘Points For Concern And Action’: Obasanjo’s Full Statement On Buhari, CJN’s Trial, Others
Nigeria Deserves Better Than What Buhari Is Capable Of Offering – Obasanjo

The elder statesman alleged further, “Criticism, choice and being different are inherent trademarks of democracy.

“If democracy is derailed or aborted, anarchy and authoritarianism will automatically follow. It is clear from all indications that Buhari is putting into practice the lessons he learned from Abacha.”

In an open letter entitled “Point for Concern and Action”, the former President accused President Buhari of planning to rig the elections and intimidating the private sector.

He also alleged that President Buhari has attacked the National Assembly and intimidated the Judiciary to “cow them to submission”.

The former President, however, called on Nigerians to use the elections to make a statement by electing only leaders that can put the country on the path of progress.

Share
Previous ‘Never Bite The Finger That Feeds You’ – Harrysong Apologies To Kcee and E-Money’s
Next APC Replies Obasanjo, Says Buhari’s Achievements Will Speak For Him