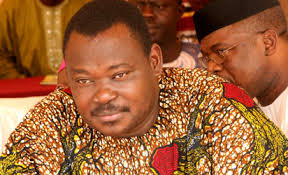 Mother of the business mogul, Mrs Theresa Jimoh, died in a mysterious early morning fire outbreak at her house in Lagos.

The 76-year-old was said to be in her house at Victoria Garden City, in Lagos, when the fire broke out at about 2 a.m. on Saturday.

Reports said the septuagenarian was reportedly burnt dead before fire fighters from the Lagos State Fire Service were able to put out the inferno.

Police Public Relations Officer, Chike Oti, a Chief Superintendent of Police, CSP, confirmed the incident declaring that the remains of Madam Ibrahim had been deposited in a morgue.

Oti also confirmed that investigation into the tragic incident had commenced.

It will be recalled that the late Mrs. Ibrahim was abducted in her house at Igbotako, Ondo State, in 2011

She was released in Sapele, Delta State, after her family had reportedly paid a huge ransom.