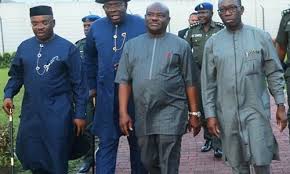 The governors made the call in a communique after an emergency meeting attended by five of them in Abuja today.

The governors noted: “We call on the CJN to ignore this so-called Court summon from the CCB and the provocative call for his resignation in some quarters.

“While we are not opposed to a genuine fight against corruption, such and action must always be anchored on the rule of law.”

Those at the meeting included the governors of Akwa Ibom, Bayelsa, Cross River, Delta and Rivers.

Governor Godwin Obaseki of Edo State who is a member of the All Progressives Congress was absent.