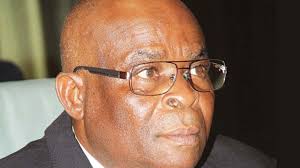 Arraignment Stalls as Onnoghen, CJN Fails to Appear in Court

January 14, 2019 Comments Off on Arraignment Stalls as Onnoghen, CJN Fails to Appear in Court 17 Views

The Code of Conduct Tribunal (CCT) has re-fixed the arraignment of Chief Justice of Nigeria (CJN), Justice Walter Onnoghen, to January 22.

Onnoghen was absent from today’s proceedings scheduled for his arraignment before the CCT on charges of non-declaration of his assets.

The change of date for Onnoghen’s arraignment followed argument by the defence counsel that the CJN was not properly served.

Lead prosecuting counsel, Mr Aliyu Umar (SAN), conceded that Justice Onnoghen, was not properly served with the summons to appear before the CCT in Abuja today.

Umar conceded that the CJN was not personally served with the charges and the court’s summons as required by the law.

He, therefore, requested the three-man tribunal led by Danladi Umar to direct a fresh service on the CJN.

The defence team, led by Chief Wole Olanipekun (SAN), explained to the tribunal’s chairman that the CJN needed not to be present having filed a motion to challenge the tribunal’s jurisdiction.

Olanipekun said he and other defence lawyers only appeared in court in protest against the jurisdiction of the tribunal.

He also said from the account given by the court official earlier in the proceedings, the CJN was not served with the charges and and summons personally, but through his aide.

Olanipekun insisted that the law requires that the defendant be personally served.

But the prosecuting lawyer said the law only requires the defendant to be aware of the pending charges, and that it was the CJN’s choice to ask his aide to receive the charges and summons on his behalf.

After series of argument which lasted for about 45 minutes, the prosecuting counsel conceded that the service of the charges and the summons ought to have been personally served on Onnoghen.

“By what the registrar has said, although the defendant was the one who directed his personal assistant to accept service on his behalf and what the law says is that he must be personally served.

“We agree that that the service should be properly done. The processes should be served personally on him.

“If, after the service is done, and the defendant is not present, we can then argue whether or not he needs to be present on the grounds that he has filed a motion challenging the jurisdiction of the court.”