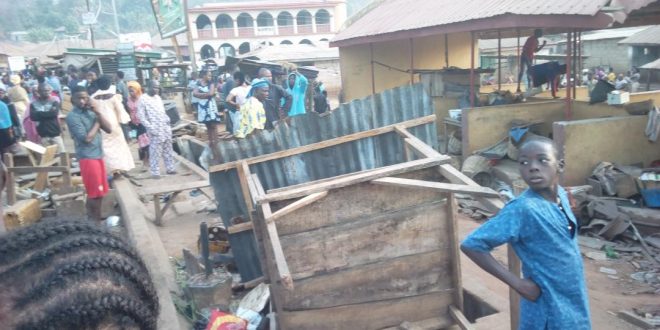 January 13, 2019 Comments Off on Iworoko: Ekiti Govt to Pick Bills of Accident Victims as Eleka Commiserates with Families 111 Views

The Ekiti State government has promised to pick up the medical bills of those wounded and hospitalised after the trailer accident in Iworoko Ekiti on Saturday evening, in which no less than 16 people died.

Deputy Governor of Ekiti State, Chief Bisi Egbeyemi, who visited scores of victims lying in hospital beds earlier this morning, promised that the state government would ensure that the lucky ones get quality treatment n the bill of the government

Chief Egbeyemi who visited the hospital before moving to the site of the accident, expressed shock at the number of death and causalities caused by the evening accident

Meanwhile, governorship candidate of the Peoples Democratic Party, PDP in the last guber election in Ekiti State, Prof Kolapo Olusola on Sunday also commiserated with the families of the victims of the Ghastly Accident which occurred in Iworoko town, Irepodun/Ifelodun Local Government Area of the Ekiti State.

In his statement,the former Deputy Governor said that it was very disheartening for such a tragedy to befall the community

Prof Olusola expressed his heartfelt condolences to the families of all those affected by the tragedy and prayed that God would grant them the fortitude to bear the irreparable loss while granting the souls of the departed eternal rest.

“The accident is unfortunate and painful , and I pray that God should grant the deceased eternal rest and give their family members the fortitude to bear the loss ,’’

“While wishing the injured a quick recovery, Prof Kolapo Olusola prays God to grant the family of the victims the fortitude to bear the great loss,” he said.