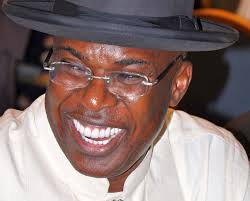 You Have No Conscience, Sylva Slams Dickson

January 11, 2019 Comments Off on You Have No Conscience, Sylva Slams Dickson 103 Views

Former Bayelsa State Governor and Chieftain of the All Progressives Congress (APC), Chief Timipre Sylva has accused incumbent governor, Hon Henry Seriake Dickson of lacking the fear of God and someone without a conscience.

Sylva had earlier accused Dickson of planning a campaign of fake news campaign against the Presidency an allegation Dickson denied .

But in another statement yesterday by his Media Assistant, Julius Bokoru, Sylva described Dickson denial as feeble but that “We will now watch and see if Dickson will keep to his words and refrain from the planned hatchet job”

The full statement by Sylva reads:

“We have read the feeble denial by Bayelsa State Governor, Hon Henry Seriake Dickson, about his plot to create an artificial war between the Presidency and former Bayelsa State Governor and leader of the All Progressives Congress (APC), Chief Timipre Sylva. Dickson is shocked because the good people of Bayelsa State alerted Sylva. Our Wednesday statement was clear and direct: Dickson seeks to create a wedge between Sylva and the Presidency through a fake news campaign

“We have now foiled that desperate, demonic and criminal plan. We thank the good people of Bayelsa State for standing with Sylva and the APC, for standing for truth and integrity, and for standing against those who think governance is about propaganda and psychological warfare.

“The issue here is not about Sylva but a campaign of fake news to undermine the Presidency. The purpose for Dickson, of course, is to bolster the faltering fortunes of his party the Peoples Democratic Party (PDP) in the state and in the country

“Dickson has no fear of God. He therefore thinks it is man rather than God that determines another man’s fate. Hence he speaks of someone’s “lifeline in politics” and “the state of mood of his political masters”. If he does not know, Dickson needs to be reminded that the prevailing national mood, today, is the presidential elections scheduled for the next few weeks.

“We are glad Dickson has denied he is not going to be involved in this mischief. This is good for the people of Bayelsa State, the polity and the country

“We will now watch and see if Dickson will keep to his words and refrain from the planned hatchet job. We know Dickson as a man with an established notoriety for mischief. He is not known to be a man of honour. Nor is he a man of conscience.

“Dickson survives on the politics of blackmail, petty mudslinging, propaganda and fake news. The bright news for the people of Bayelsa State, and Nigeria, is that he has exposed how alien he is to credibility.”