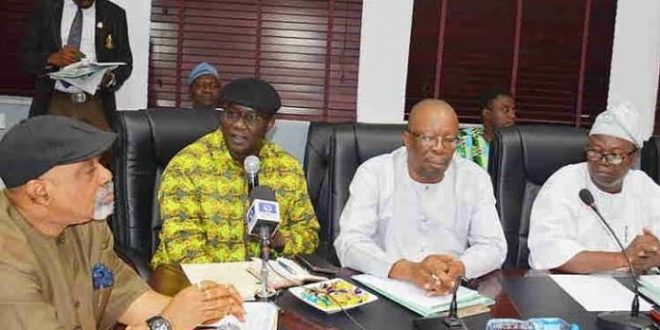 The Federal Government and the Academic Staff Union of Universities (ASUU) reached possible agreement on Monday toward resolving the ongoing lecturers’ strike.

Sen. Chris Ngige, Minister of Labour and Employment, said this after a reconciliatory meeting with ASUU in Abuja.

Ngige said the meeting was fruitful as an agreement had been reached between the Federal Government and the striking university lecturers.

According to him, the Federal Government has released N15.4 billion for the payment of the salary shortfalls, which was one of the major demands of the union.

“On the issue of salaries in tertiary institutions, especially in universities, the Ministry of Finance and the Office of the Accountant- General provided evidence that as at December 31, 2018 the Federal Government had remitted N15.4 billon.

“Also on the issue of Earned Allowances in the universities system, they also showed us evidence that Mr President has approved the N20 billion to be used to offset the outstanding arrears of the 2009 and 2012, audit verified earnings, in the university system.

“This money is being worked on, and will be released to ASUU as soon as the process is completed.

“ASUU has fulfilled its own side of the bargain in terms of NUPECO, which is the Pension Fund Administration company that ASUU has floated to take care of pension for people in the university system.

“The Pension regulator, the PENCOM, has asked certain positions to be fulfilled and they gave ASUU a temporary license, which has expired.

“ASUU has submitted all the documents and fulfilled all conditions needed to get their license,” he said.

Ngige noted that the meeting had resolved to mandate the Ministry of Education to get in touch with PENCOM to make sure that the permanent licence is issued to ASUU as soon as possible.

The minister also said on the issue of university revitalisation, the President Goodluck Administration entered into an agreement with the ASUU for revitalisation of 20 universities annually for the next 6 years.

“This is starting from 2009, this Government will look for resources for the funding.

“We have also offered ASUU some token to show good faith and that amount is known to them. Issue of visitation panel is also taken care of.

“These were major issues discussed and ASUU is supposed to take back the resolution of these meetings to their members, while we expect that they will get back to us by Thursday, ” he said.

Also, Prof. Biodun Ogunyemi, ASUU National President, said the National Executive Committee of the union will review its decisions based on the new commitment by the Federal Government.

He said the strike could only be called off or not after the NEC meeting. He did not say when the meeting will hold.

The lecturers have been on strike since November 4 to demand improved funding of universities and implementation of previous agreements with the governmen t.