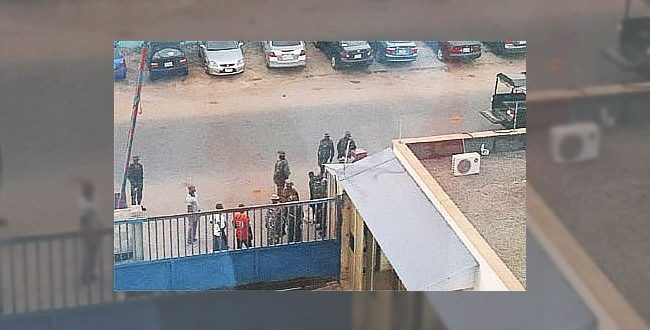 Armed soldiers that seized the Maiduguri, Borno State office and Abuja Headquarters of the Daily TrustNewspaper, vacated the besieged premises, Sunday night, on the orders of President Muhammadu Buhari who promptly intervened in the face-off.

Senior Special Assistant to the President on Media and Publicity, Garba Shehu, revealed this in a tweet, saying the President gave the order, insisting that whatever problems may have arisen between the newspaper House and the military should be sorted out through dialogue.

Channels Television confirmed that the force had vacated the Abuja premises while sources said some were still present at the Maiduguri office.

Not only that, the soldiers also arrested and took away the regional editor, Uthman Abubakar, and a reporter, Ibrahim Sawab.

Eye witnesses revealed that the soldiers, numbering about 24, stormed the Utako District, Abuja headquarters of the northern newspaper in five pick-up trucks, Sunday afternoon, searched the editorial department and seized computers as well as other items before ordering the staff out.

That done, they then reportedly turned off the lights and put the place under lock and key.

In the Maiduguri operation, the soldiers were said to have been backed by agents of the Department of State Services, DSS, and the Civil Defence Corps. The combined forces allegedly stormed the paper’s regional office along Maiduguri-Baga Road where they arrested the regional editor and the reporter.

In a telephone interview with Channels Television, Defence Spokesman, John Agim, a Brigadier General, had disclosed that Daily Trust had published information about the military’s counter-insurgency plans which it believed could further threaten Nigeria’s peace and security.

The alleged offensive story, the paper’s lead in the Sunday edition, detailed how the Nigerian military had assembled troops and equipment preparatory to a massive operation to retake Baga and five other towns in Borno from Boko Haram.

The Crest recalls that Baga was captured within the last two weeks by the Islamic State in West African Province (ISWAP), the faction of Boko Haram affiliated to ISIS. And Daily Trust had reported that more towns were captured by the rampaging insurgents, including: Doron-Baga, Kross Kawwa, Bunduran, Kekeno and Kukawa, after dislodging the Nigerian troops.

After surrendering the Maiduguri and Abuja offices of Daily Trust, reports had it that the soldiers specifically requested for the three journalists that authored the story-two in Maiduguri and one in Abuja.

The three journalists are: Hamza Idris, the paper’s political editor; Mr. Abubakar, the Maiduguri bureau chief; and Mr Sawab, a reporter. The Crest could not ascertain independently ascertain if the soldiers took Idris away.