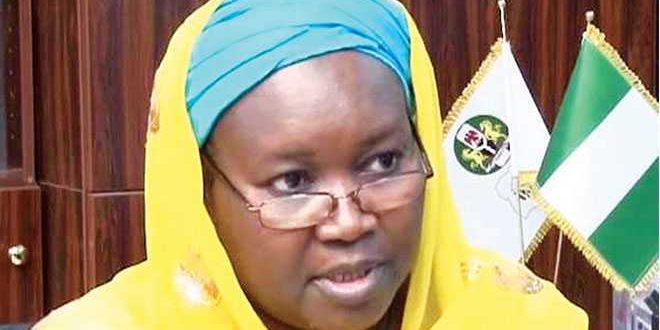 A National Commissioner of the Independent National Electoral Commission, Amina Zakari, has dismissed reports that she is a blood relation of President Muhammadu Buhari.

The Peoples Democratic Party and other political groups as well as individuals had alleged that Zakari, who was, on Thursday, named by the commission as its Chairman, Advisory Committee and Presidential Election Collation Centre Committee, was a niece of Buhari.

They, therefore, submitted that she was not qualified to preside over the collation of the presidential poll’s results.

By virtue of her position, she will coordinate the collation of results for the February 16 presidential poll, in which Buhari, the candidate of the All Progressives Congress in the election, will contest the presidential ticket for a second term in office.

The Presidency has however debunked the allegation that Zakari is a blood relation to the President. It also explained that the national commissioner was appointed to INEC during the government of former President Goodluck Jonathan.

The PDP, the Inter-Party Advisory Council and several political parties had called on INEC to rescind the appointment of Zakari as the chairman of the committee on National Collation Centre.

But in an interview with the BBC, which was aired on Saturday, however, Zakari, who is a former acting Chairman of INEC, said she had served as a special adviser to ex-President Olusegun Obasanjo.

She further stated that she was appointed by former President Goodluck Jonathan as an INEC commissioner and she had done the job diligently for the last eight years.

Zakari added, “I’m not his (Buhari) niece; I am not his cousin and, on this job, I was appointed since 2010 by President Jonathan. Prior to that, I was appointed as SA to President Obasanjo and I have done my work conscientiously over the years as a patriotic citizen of Nigeria.

“He is not my cousin; he is not my uncle as is being claimed but I know him as my leader and the leader of the nation.”

Meanwhile, the Peoples Democratic Party, the pan-Yoruba socio-cultural organisation, Afenifere, and the presidential candidate of the Allied Congress Party of Nigeria, Mrs Obiageli Ezekwesili, have demanded the removal of Zakari as the Chairman, Advisory Committee and Presidential Election Collation Centre Committee of the INEC.

Also, a former Ekiti State governor, Ayodele Fayose, and the presidential candidate of the National Rescue Movement, Usman Alhaji, believed Zakari, who has been alleged to be a relation of President Muhammadu Buhari, should step down from INEC to give credibility to the forthcoming elections.

In her reaction, Ezekwesili asked the Chairman of INEC, Prof. Mahmood Yakubu, to reverse the deployment of Zakari as the collation officer for the presidential election.

In a statement on Saturday, the ACPN presidential candidate said, “The INEC chairman appears to have bowed to pressure from the Presidency.”

She described Zakari’s appointment as political corruption, “considering that having a relation of the President, who is a contestant in the February 2019 presidential election, amounts to an apparent conflict-of-Interest situation.”

She said such “repugnant deployment of Zakari to the collation centres suggests a brazen attempt to ease rigging for the APC’s candidate in the election.”

To ensure peace and give all the candidates a level playing ground, the ACPN presidential candidate asked INEC to restore confidence in the management of the collation process by reversing the appointment of Zakari as the chairman.

Ezekwesili added, “Zakari can be assigned another task farther away from tasks that can hinder electoral integrity.

“Or how else can one describe this repugnant action of placing the President’s niece, Mrs Amina Zakari, at the head of the centre for collation of election results?

“The President and INEC chairman should know that this extremely repugnant and provocative act of political corruption that seeks to undermine our democracy and destabilise the country shall be resisted by all patriotic Nigerians.

“I caution the INEC chairman and the Presidency to reverse this shameful posting immediately and safeguard the integrity of the 2019 elections.”

n its own reaction, the PDP, on Saturday, said Buhari’s admittance that he had a marriage relationship with Zakari had vindicated its stance that she could not be trusted with the collation of the presidential election results.

The PDP National Publicity Secretary, Kola Ologbondiyan, in a statement, also alleged that Zakari had become a major identifiable threat to Nigeria’s democracy, national stability and corporate existence as a nation.

According to him, now that she has been busted, Nigerians expect her to quietly resign from INEC, instead of allowing her to be allegedly used as a tool to derail the nation’s democracy and plunge it into crisis.

Ologbondiyan, who is the Director, Media and Publicity, PDP Presidential Campaign Organisation, challenged Buhari to also respond to the position of an elder statesman, Dr. Junaid Mohammed, who, more than two years ago, in a media interview, accused Buhari of nepotism in the nomination of Zakari, his niece, and the pushing of her appointment as a commissioner to represent his interest in INEC.

He said, “It is now clear that in addition to the relationship by affinity, Buhari also has a consanguinity relationship with Zakari and has not denied that he started his early childhood in Amina Zakari’s father’s house.

“President Buhari’s admittance has effectively established that the PDP has not been crying wolf on the impropriety of involving Zakari in the collation of presidential election results, let alone being appointed to head the final determination of the presidential election.

“It is totally unethical and immoral for an umpire to insist on officiating a contest even when her impartiality is called to question. Even in the judiciary, judges recuse themselves in cases involving parties they have affinity with. Zakari must, therefore, recuse herself if the 2019 presidential election must be credible.”

Appointment is a moral burden on Presidency, INEC – Fayose

Also, Fayose has described the appointment of Zakari as a moral burden on Buhari, the APC and INEC.

Fayose said the justification of the appointment by the Presidency and INEC was a further show of alleged desperation to rig the February 16 presidential election.

The former governor, in a statement on Saturday by his media aide, Lere Olayinka, said with the doubt being raised over the ability of Zakari to be neutral during the election, “fairness and equity demand that she should step aside from playing any role in this election.”

The ex-governor added, “Even if Amina Zakari can be as impartial as she can be, nevertheless, now that Nigerians are thinking that there is real likelihood of her being biased, she should excuse herself; more so that she is not the only national commissioner in INEC.”

He described the Presidency’s defence that Zakari was appointed by a PDP government as puerile and unacceptable.

Fayose added, “When Amina Zakari was appointed as INEC national commissioner, President Buhari, her blood relation, was not a presidential candidate.

“Certain things can be good but might not be morally right. This issue of Amina Zakari, a known blood relation of the APC presidential candidate, functioning as INEC head of collation centre, is morally wrong.

“Let every political party too bring somebody to the situation room. It shouldn’t be a hidden agenda.

“Therefore, the Presidency and INEC have the moral burden to prove to Nigerians that they are not in any way out to short-change them.”

She must not participate in elections, says Afenifere

Also, Afenifere said Zakari should not be allowed to participate in the February and March general elections.

It claimed that she played an ignoble role in the governorship elections held in Osun and Ekiti states in 2018.

The Publicity Secretary of Afenifere, Mr Yinka Odumakin, said this in an interview with SUNDAY PUNCH in Lagos on Friday, stressing that retaining Zakari, despite the public outcry against her nomination, meant that the commission was not ready to be transparent in the conduct of the next elections.

The Afenifere spokesman said the alleged “reprehensible activities” of Zakari alone had created some credibility problem for INEC.

Odumakin said, “I think the problem with Amina Zakari is that she has become a red flag. The INEC chairman said she would be in charge of the collation centre and not the election but if you look at the roles she played in the elections in Osun, Ekiti and others, you will see that she is notorious and she has become an embarrassment to the commission. She has removed a lot of credibility from INEC.

“Really, Nigeria should insist that this woman should not be part of the 2019 elections. She should be removed.”

In the same vein, Alhaji, the presidential candidate of the National Rescue Movement, said INEC had shown that it was not ready to conduct free, fair and credible elections.

He flayed the INEC for appointing Zakari, who he described as Buhari’s biological relation, to be in charge of the collation centre for the presidential poll.

He stated, “We condemn her appointment in its entirety. This appointment shows clearly that Buhari is not ready to conduct free and fair elections. Amina Zakari should not have any business in INEC, let alone be in charge of the presidential election collation centre.

“She has biological relationship with President Muhammadu Buhari and a senior official of INEC. Then tell me, where is the independence of INEC?