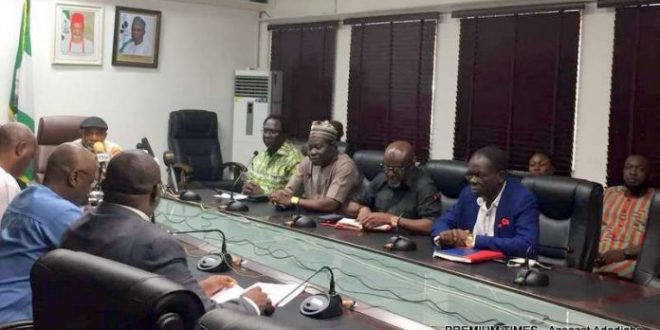 In a bid to avert a planned nationwide industrial action, a delegation of the Federal Government is currently in a meeting with the leadership of Nigeria Labour Congress (NLC), Trade Union Congress (TUC) and other Labour unions.

The meeting which is currently holding at the nation’s capital in Abuja is aimed at addressing various issues including the new national minimum wage proposed by the union.

The labour leaders are insisting that the executive must transmit the new minimum wage structure as agreed to by the presidential tripartite committee, to the National Assembly or risk a resumption of the strike it had earlier suspended.

President Muhammadu Buhari had during his 2019 budget presentation to the National Assembly last month, announced that a high-powered technical committee would be set up to review the resolution of the tripartite committee on the minimum wage.

But the unions had vowed not to be part of the planned review by the high-powered technical committee as announced by the president.

They insisted that all discussions had ended on the new minimum wage as the labour union has taken a stand.