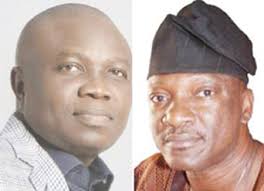 Agbaje, Ambode in War of Words Over Budget 2019

The war over Lagos thickened Tuesday and Wednesday respectively as the incumbent Governor of Lagos State, Mr. Akinwunmi Ambode of the All Progressive Congress, APC, and the standard bearer of the People’s Democratic Party, PDP, Mr. Jimi Agbaje, squared up over the 2019 appropriation bill.

Agbaje had, on Tuesday, hit Ambode over the apparent delay in presenting Budget 2019 to the State House of Assembly, describing him as a lame duck.

The PDP candidate for the March 2, 2019 gubernatorial election in the state had, on Tuesday, said Lagosians were suffering and bearing the brunt of the “breakdown of democracy” in the ruling APC, and that governance would be stalled till May 29, 2019 when a new Chief Executive would be installed in the state.

“It is not surprising,” Agbaje had declared, matter-of-factly. “I do not expect governance until after May 2019.

“The governor has become a lame duck. We hear that approvals are now given in other quarters. When democracy collapses in a ruling party, the people bear the brunt.”

Few Lagosians would disagree with Agbaje because their state government has, over the past 10 years, never faltered in presenting its budget before the end of a fiscal year.

In his eight years of governing Lagos State, Ambode’s predecessor, Mr. Babatunde Fashola, now Minister for Power, Works and Housing, also never failed to present his budget before the end of the fiscal year.

The delay in this year’s presentation set tongues wagging, with the governor’s traducers and the PDP candidate mocking him, saying that Ambode had been rendered powerless by some extraneous forces now dictating the tune and directing the affairs of Lagos State.

But on Wednesday, Governor Ambode dismissed claims of his purported political impotence, claiming that Budget 2019 was, in fact, before the House of Assembly.

His Commissioner for Budget and Economic Planning, Mr. Olusegun Banjo, on Wednesday, disclosed that the budget was already before the State House of Assembly and that his boss had actually intended to lay the appropriation bill before the House on Christmas eve, December 24, 2018.

In a statement he signed, Banjo said the Governor had sent verbal information to House Speaker to present the budget on Monday, December 24, 2018, after the State Executive Council’s approval on December 19, 2018. But the ceremony was postponed as the House was on recess and could, therefore, not form a quorum.

The Commissioner further explained that in order to meet the traditional presentation deadline, a formal letter was sent to the House on Friday, December 28, 2018, detailing the content of the budget.

Consequent upon these, it is expected that when the House reconvenes, the Speaker would inform members of the content of the Budget proposal sent by the Governor and take necessary action.

The commissioner revealed that Budget 2019 that Ambode forwarded to the House is N852.317billion